Pick any superlative adjective … it was all that and more.

We were lucky enough to be in the path of totality so invited friends who weren’t to join us on the deck for a day of fun and a (probably) once-in-a-lifetime experience. At the time I issued the invitation, no one knew what the weather was going to be like. Summer afternoons in Georgia can be anywhere from perfectly clear, to partly cloudy, to popup showers/thunderstorms, to completely covered up. Even the morning of, the “local” (Atlanta) meteorologists were predicting 30% cloud cover in the areas of totality in Georgia. It was a crapshoot.

We lucked out and as guests started arriving, it was perfectly clear. Which meant wonderful viewing but on a deck that gets 12 hours of direct sun, it was toasty! Adult beverages, lots of conversation, and some guitar jamming by my husband and a friend … it was a party!

I did, however, watch some clouds building in the south with a little apprehension. Would they hold off? 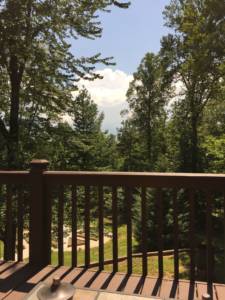 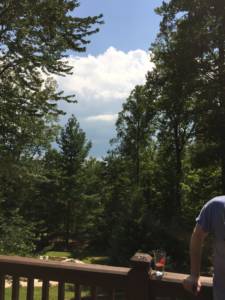 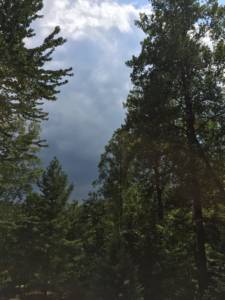 A light lunch, then sky-watching – it was still clear above us. It started shortly after 1:00 p.m. I wanted photos but had read that taking a direct photo of the sun can harm the camera lens on a phone, so ingeniously (I thought), I taped a lens from a pair of viewing glasses over my phone’s lens. Nope. Just an orange blur. I even tried the same thing on our regular camera. Not quite as blurry as the phone but still didn’t show anything of import. The photo below was taken with my phone at totality without any filter. The sun’s corona still overloaded the camera so you can’t even tell the moon is in front! 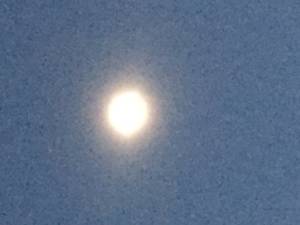 I’m still heaving a big sigh. However, we do have a lot of trees which become a good filter if you look down, rather than up. See the half-moons? 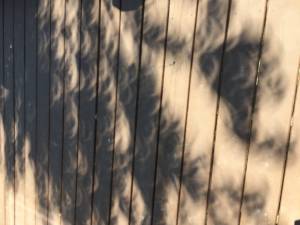 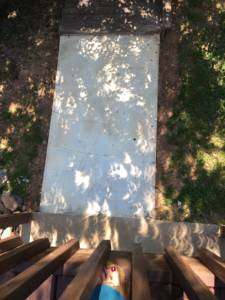 The moment (a little over a minute) of totality was probably the most awesome thing. The lighting was a nice twilight (ah, a little relief from the heat!) but the silence. No birdsong, no bugs’ buzz, not even the usual slight background hum from the 4-lane four miles away. It wasn’t quite dark enough for the night critters to start their song, either. Just a couple of quiet “wows” from us.

The “diamond” appeared (the first glimpse of the sun as the moon moves out of the way) and that moment was almost over. We were still quiet until…a small plane flew by. That ruined the moment and it went back to being a party again. The clouds finally made it this far north about an hour after totality (we even had a very brief shower) and obscured the rest of the eclipse but that was okay.

I didn’t experience any “woo” during the eclipse but I can tell you that neither my husband nor I slept at all well that night. We’re wondering if it messed with our circadian rhythms a little. Thankfully, it was just one night – I slept like a log last night!

I’ve been thinking about that day since then. Unless we travel (which we might), husband and I will never see a total eclipse again in our lifetimes. (If we travel, I will definitely buy a real solar filter for the camera.) But what I really took away from it:

There were ten people on our deck that day. All friends of ours, to be sure (which automatically means they’re cool people), but they’d never met each other before. Christians, Pagans of different paths, Agnostics, and Atheists all intermingling, enjoying themselves, and making new friends. I wish that would happen more in the wider world.