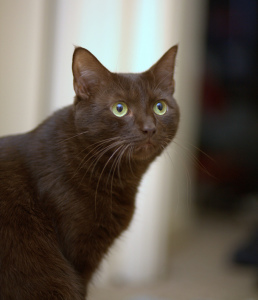 [Amy’s note: Sorry I haven’t had time to transcribe more of Fudge’s story. I’ve been really busy trying to save my boss’ butt – again. To refresh your memory, Part II is here.]

That evening, back in our quarters, I interrupted Abou’s study of a piece of papyrus by projecting a feeling of being wrapped, as they did their dead. Abou stopped reading and turned his attention to me.

“What are you trying to tell me, cat?” he asked.

I felt frustrated. If I could only tell him in the words he used! Then, it came to me. Abou did not like crowds and felt extremely uncomfortable whenever his master sent him to the bazaar to purchase materials. I projected that image and feeling to him, then once again, the mummy wrappings, followed by a feeling of ease.

Abou cocked his head. He didn’t understand. I heaved a sigh, hopped onto the table and padded over to a pile of scrolls he’d taken from the library but not read. Some I didn’t know the subject matter but others had to do with magic. Those I could sense to the point I had an idea of their content because when someone writes of magic, a little of it leaks into the ink and the material it is written on. I nosed one out of the pile I was fairly certain covered basic magical theory. Taking my clue, he pushed aside the one about water, unrolled the one I’d indicated and started reading.

Halfway through, he turned to me with a smile on his face. “I finally understand. You’re telling me I need to have a shield!”

As you know, cats don’t smile, at least not in the human sense. To indicate approval, I purred and rubbed my face against his arm.

Abou absentmindedly pet me as he read further then pushed the scroll aside. He screwed up his face in concentration and when nothing happened, said, “Where are you? I can’t feel you. Why aren’t you helping?”

I hung my head. While we can instruct on methods and construction, shielding is one of the few things a human must do on their own. I don’t know why but familiars cannot assist with this type of magic. I projected the image and feeling of being at a wall too high to jump.

Abou sighed. “I think I understand. You cannot help here. But you think this is important so I will continue with my efforts.”

It took some time but at last, a cocoon shimmered into existence around Abou. “I have it!” he exclaimed, and the cocoon disappeared.

That night the lamp almost ran out of oil as Abou read his papyrus with me interrupting with a push to his mind each time his shield fell. The next night I didn’t have to interrupt as much and finally, after something over a week, he maintained his shield, even in his sleep.

The shield did not please the master, however. He made mention of it the first morning, yet couldn’t argue with the reasoning that Abou hated crowds, felt a need for a shield and needed to maintain it even in private so it became second nature.

Over the following years, I noticed the master aging and spending more time petitioning his god for youth, moving from one god to the next when his petition did not work. I privately laughed as it appeared his gods had deserted him about the same time as Abou learned to shield. The flow of energy between the master and Abou had, naturally, stopped. I finally learned why he’d kept Abou on even when the difference in element was discovered. He could draw from Abou but apparently no one else.

Abou, on the other hand, flourished. He was a sponge for his master’s teachings. After only ten years, he was his master’s equal in magical ability – albeit in a different element – and had far outpaced him in knowledge of the library. Patrons consulted Abou much more frequently than the master on where such-and-such a scroll might be found, or where to look for particular information. My human was known far and wide for his specific knowledge of healing – both preparations and magical spells.

In my twenty-first year as a familiar, the master passed on. As a mage and priest, he was given a funeral second only to the Pharaoh’s in pomp. All proper rites were observed and after the requisite thirty days of mourning, Abou was considered a free man and officially took the master’s place in the Library and temple.