So…you have probably heard of Kyphi. No? Ooh…you’re missing out.

Our friends over at Wikipedia describe Kyphi as “a compound incense that was used in ancient Egypt for religious and medical purposes”. The good folks over at Ancient Egypt Online list four different sources for Kyphi recipes.

Since getting called by an Egyptian god, I figured I ought to do something kinda familiar to him so decided to make a batch of Kyphi. I opted for a modified version of that found in the Harris Papyrus but then … proportions? More rootling around the ‘Net and I found this site where she talks about making Kyphi, complete with proportions.  I modified that a little further to suit my own needs and then made up a shopping list – I’ve been rather lax in keeping my herbal stock up.

Once I had all ingredients in hand, I started in. The first thing to do is grind all the dry ingredients. Oh, not to a powder but awfully fine. (I’m a Virgo. Neatness counts.) I’ll say it here: I didn’t use a mortar & pestle. Grinding resins is a bitch, especially when you’re a little person without much in the way of upper body strength. I have a coffee grinder used solely for grinding herbs. It got a workout.

Problem one: the Frankincense is sticky. It ground up all right – and then immediately stuck to itself. I broke that up as best I could but I still ended up with little perls of it. (Shudder. Not neat.) (I found out later if you freeze resins overnight before grinding, they won’t be nearly as much of a pain. I made a note.)

Problem two: couldn’t find fresh juniper berries so had to use dried. I use dried berries a lot and they generally plump up okay when soaked in a liquid but juniper berries don’t have as much meat as some others & they didn’t quite “plump”. (Makes sense. They’re not actually fruit but seed cones.)

Smoosh the juniper berries & raisins with the rest of the wet ingredients, try to make a smoothie out of it. Again, I prefer modern conveniences: hand mixer instead of elbow grease. 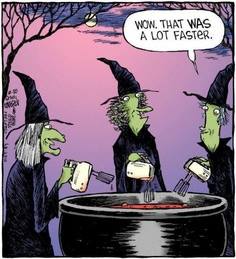 Dust fingers with powdered benzoin, form the goop into little balls. Dusting didn’t prevent my fingers from looking like those of a toddler eating without utensils. (It’s not too horrible tasting if you lick your fingers. Just sayin’.) 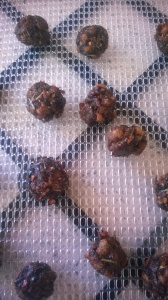 Although I own a dehydrator, I wanted the timing to be “old-fashioned”, so I let my little balls of goop air dry for an additional two weeks.  This is the only advantage I can think of to low humidity in the house. Static electricity be damned – these little guys dried HARD!

Finally, six weeks after I’d decided on the project, my incense was ready to be tested out.  Fired up a charcoal disk in an incense burner, plopped one ball on the disk & waited to be transported by the scent. It did smell heavenly. I’m usually not a fan of sweet scents but the whole combination is sweet/spicy. I can see why the Egyptians concocted this incense. 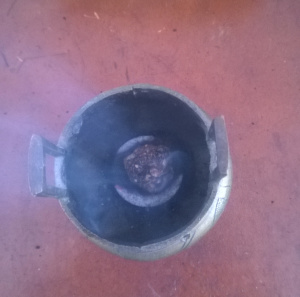 Problem Three: It’s been a long time since I used combustible incense and now I remember why. Within minutes, my eyes started burning – even sitting at the other end of the house. (I’m a smoker and smoke bothers me. Go figure.) Although it didn’t put out a horrible amount of smoke (the alarm didn’t even cheep), I ended up opening a window in 40°F weather & putting the burner on the sill until it was done.

So, I want to “burn” Kyphi for this guy but can’t handle the smoke. What to do? Enter the oil-warmer, generally used for – what a concept – warming essential oils. 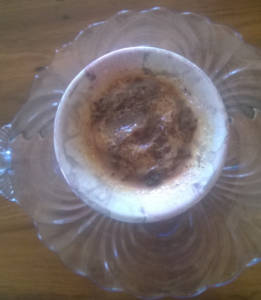 I poured a little water in the top of the warmer & plopped another ball of Kyphi in there. The ball melted and as it did, released the scent beautifully without irritating my eyes. It’s a balancing act – you want little enough water that the herb mixture gets good ‘n hot but not so little that it burns & starts smoking. This is my solution. It does leave a goopy residue when it’s done but cleans up easily with hot water. (Now I have to find a suitable, masculine-looking oil warmer. Pink ain’t his color.)

I had so much fun making the Kyphi, I ‘m going to make more. Plus…I’m working on a custom incense blend for a friend. Didn’t like the first combination so try, try again. But oh, it smells so loverly in my shop…!