As most of you know, husband and I took a vacation last week – the first in nearly 5 years. (Long overdue, it was…) When I decided I wanted beach, I also decided I wanted to go somewhere I didn’t have to lift a finger for a week. I found an all-inclusive resort on Saint Martin that fit the bill. 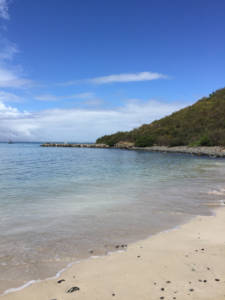 If you’ve never been to Saint Martin (French side) or Sint Maarten (Dutch side), you really need to put it on your bucket list. Only 37 square miles, it’s beautiful. And … take a camera. A real one. Don’t rely on your cell phone. There were so many things I wanted to take a photo of that required a zoom and my phone doesn’t do that. (Therefore, my selection of photos rather sucks.)

Our resort was on a small cove on the north side of the island. However, we like to walk on the beach and the cove really was too small for that – five minutes from breakwater to breakwater. As is hinted in the photo above, there are volcanic mountains surrounding the cove. There is a hiking trail up there but you have to walk up to get to the trail. Neither of us has hips that will handle that sort of walking. 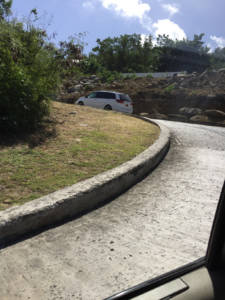 This is on the way out. On the way in, there are several signs, “Descentes Dangereuses” or “Dangerous Descents”. There are no straight roads, either!

They really weren’t lying when they said “all inclusive”. We were greeted at the reception desk with a fruit punch (your choice of virgin or with a shot of rum). Once in the room: 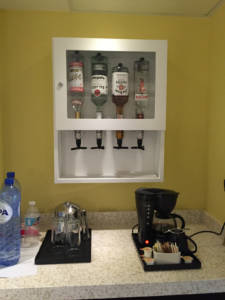 Our plan was to sleep and read. Did a lot of both. Due to the intense sun that close to the equator, even though I tan easily, I chose to limit my sun exposure.  One half hour (with SPF 80 sunscreen) was enough for the pasty-white husband to stay out completely! Apparently, we were about the only ones that felt that way. The beach was crowded from early morning until the sun went down and there were plenty of peeling lobsters walking about. 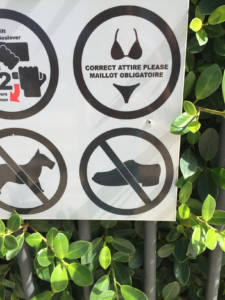 You have no idea how glad I was that the top right sign was enforced! Obesity isn’t just an American epidemic…

I also spent a lot of time watching the local flora and fauna. The resort has a mascot: an iguana named Gaston. 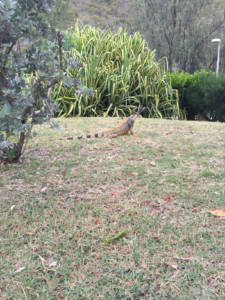 He’s not what you’d call “friendly”. More like “tolerant”.

There’s also the resident cat. He’s been there at least 7 years (according to one of the ladies at reception) but no one has given him a name! 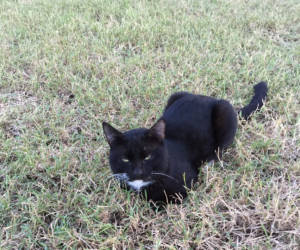 The pic doesn’t show it (and trust me, I tried…) but he has white socks on his rear paws. I started calling him “Socks” because although we were on French soil, “Chausettes” just didn’t sound right for an obviously male cat! He’s extremely friendly, pausing to get scritches wherever they’re offered. If the scars on his ears are any indication, he’s defended his territory a few times. Possibly from a ginger cat we saw passing through one evening.

Then there were the photos I couldn’t get with my cell phone. The beautiful black/iridescent green hummingbirds taking advantage of all the flowers. The three little house geckos that lived somewhere very close to our patio. And the bats we watched each night, flitting through the (palm) treetops, catching their dinner.

Being from a more-or-less northern climate, flowers in January was a pleasant sight. 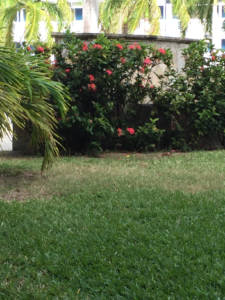 View from our patio. 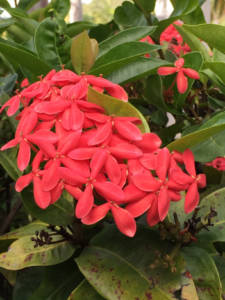 Closeup of those shrubs 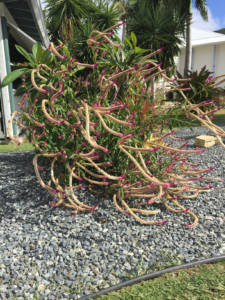 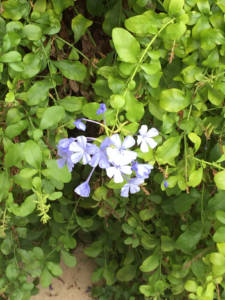 There may have been nectar for the hummers but none of the flowers had any scent!

I have never been so impressed with a hotel staff as I was this one (and thanks to my job, I’ve stayed in some rather swanky places). Everyone, from the folks at reception all the way down to the maintenance man, was as friendly as could be. Although French is the official language, virtually everyone spoke English, as well. (And Spanish, and German…) My problem? Was their primary language French or English? It could be either. I didn’t know whether to address someone in English or French until a phrase or sentence was spoken!

After 5 days, I was ready to come home. I missed my house, the trees and mostly, the cats. And the land. The very weird thing was that I could feel no earth energy beneath my feet. My eyes told me I was standing on grass and soil but there was nothing. Perhaps due to the underlying volcanic rock? I don’t know.

I’m not one for souvenirs but being in the islands, I just had to get some rum! So many from which to choose… I had to go for the bottles rather than the contents: 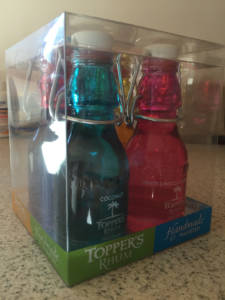 Would we go back? To Saint Martin (or Sint Maarten), yes. To this particular resort? No. Without a lot of places to walk, it wasn’t ideal. Not to mention that the “nightclub” was open-air and loud enough that sitting on the patio at night wasn’t pleasant for us old folks. But all in all, a wonderful experience.