As most of you know, we went to Belize for our vacation this year. It was …enh. And not the fault of anyone, really. I chose the wrong time of year to go for fishing (my husband’s hobby), and the weather was unusually rainy, making it unpleasant to go for walks on the beach. But there were bright spots!

The place we stayed was wonderful. After a rough start (our flight was almost an hour late leaving Atlanta, making us miss our connection from Belize City to San Pedro on Ambergris Caye, and thus to the resort), we were greeted by smiles and 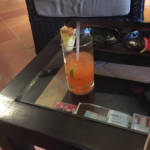 Tidbit: we were talking with one of the owners over drinks our first night. (A Dutchman who’d been in Belize for 17 years.) He was telling us about all the different sorts of people who populate Belize…Maya, mestizos, blacks, whites… and some of the personnel difficulties he had when developing the resort. Apparently one worker got pissed at another worker of a different race and put a curse on him! It was mentioned casually, as if witchcraft was normal. I loved it!

The first day was relaxing – sort of. Our cabaña was right on the beach, affording a lovely view from the porch. 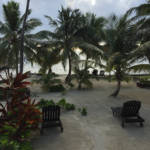 Unfortunately, they have a major fly problem. They do spray for mosquitoes but haven’t figured out the flies, yet. Sitting on the porch meant a lot of swatting. But there were “pets”, too. 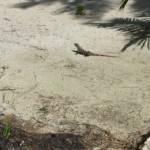 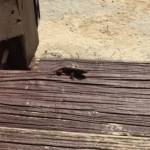 This little guy lived below our porch and we saw him every day. He didn’t do a lot of snacking on flies, though.

Palm trees usually mean coconuts, right? Yep. But these sure don’t look anything like the ones we get in stores here – they’re about twice the size! I had to watch where I walked because I didn’t want to get beaned by one… 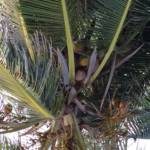 Tidbit: coconut water comes from green coconuts. Coconut milk comes from ripe ones. The staff person who answered my questions offered to knock down one of the green ones, bore a hole, and let me drink the water. I declined but it sure was sweet of her to offer!

You may not know it, but Belize has the second largest barrier reef in the world. Although I’m used to the sound of surf when near the ocean, the waves breaking over the reef sounded very much like the roar of a distant interstate, minus horn honking and the howling of jake brakes. And because of the reef, the water really isn’t very deep. At the end of the resort’s pier, it’s only about 3 or 4 feet and (according to my husband who knows about these things) only about 30-40 feet at its deepest inside the reef. Not really deep enough to go swimming. Not that I wanted to. I dipped my toes into the water and it was cold. (For friends: I panicked over getting a new swimsuit needlessly. It never came out of the suitcase.) 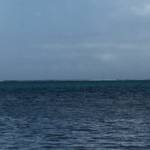 I spent a lot of time on the porch, supposedly reading but in reality, watching the birds. Unfortunately, I couldn’t get a good picture of the frigate birds flying around but there were at least four of them. 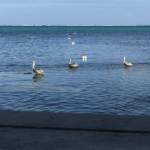 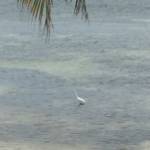 Tuesday was the highlight of the trip. We made our way inland (15 minute boat ride from the resort to the airport, 15 minute flight from the island airport back to the mainland, one hour drive north) to the Lamanai Archaeological Reserve. Our tour started 27 miles downriver from the Reserve with about an hour boat ride. The guide stopped several times for us to see cool things along the river. 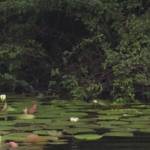 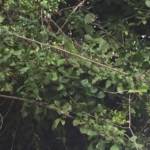 Can you spot the Iguana?

Two things I couldn’t get a picture of: one crocodile (Lamanai means “Sunken Crocodile”) who submerged too fast for me to get the phone up, and a pair of Jabiru storks (google them, they’re cool), who were too far away for the puny camera on my phone to capture. (One of these years, I’m going to remember to bring a real camera with me.) I have a couple of photos of howler monkeys that are so bad, I won’t share them.

The ruins were fascinating. Lamanai was active for about 3,000 years (1500 BCE to 1500 CE) and encompassed 20 square miles. The Reserve (the protected area) unfortunately only covers about a tenth of that. The estimated population was between 40,000 and 60,000, quite a bit larger than Tulum. It’s not as open or excavated as Tulum, either. Three temples plus a few other structures have been uncovered. The first we were taken to was the “Mask Temple”: 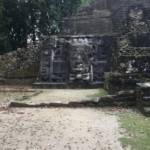 What you see isn’t stone. It’s a fiberglass shell covering the original stone, preventing further erosion. Our guide had a drawing of what it looked like when initially uncovered: 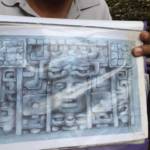 The blue paint was only visible for about a month before it washed away.

Nearby, a building with a stela, depicting a Mayan chieftain. 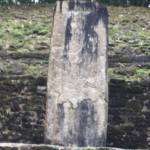 Tidbit: as a chief, his headdress has feathers in it. (I forgot to get a picture of the sketch of what it originally looked like.) I verbally assumed quetzal feathers and got a glare in return. The guide’s response was, “Have you ever seen a quetzal? [No, of course not.] They’re small, very rare birds with only three tail feathers. There’s no way every chief could have quetzal feathers in his headdress. Me? I’d rather have feathers from an ocellated turkey. Their feathers are bright blue.” I googled them when I got home and agree with the guide. The feathers are gorgeous!

The second temple we were taken to is the main temple for Lamanai. 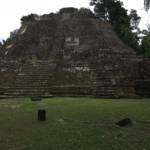 In its heyday, it was 13 stories high. Eleven are still (mostly) intact. Tourists may no longer climb the stairs in front. Almost 4 years ago, a lady climbed the precipitous stairs and took the express down. She was airlifted back to the US, unconscious, with multiple broken bones. No one I could find knows if she survived, including our guide. Instead, there are now wooden stairs to the left so you can go all the way up to the top. My hips and acrophobia said, “nope” to that one.

Tidbit: a good friend has visited the site and says it’s still active. Not wanting to piss any local spirits off, I took some cornmeal with me as an offering. (No one in customs had a second thought about a container of powder in my cosmetic case. 🙂 ) About five minutes into the walk to the first temple, I started getting a migraine. I haven’t had one of those in decades. While everyone was clambering around the top of the main temple, I excused myself from the rest of the group, walked a ways away, and sprinkled the cornmeal around with a quiet ‘thanks’. Five minutes later, the headache was gone. Active? You be the judge.

In addition to the ruins, they’re very good about marking the types of trees. For those of you who enjoy copal resin, this is what its source looks like: 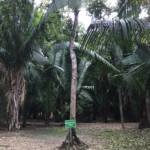 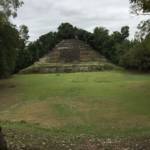 (The grassy area is large enough to put in a football pitch with room to spare.)

Tidbit: husband had a closer look at this temple than I did. He said there are the remains of something being burned very recently (probably incense) on one of the stones.

Opposite this temple are the remains of a palace. We know the Maya were small people according to today’s standards but the rooms uncovered are smaller than my bathroom! 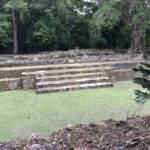 That was the extent of our tour. There are mounds, and mounds, and mounds that they haven’t yet uncovered but have scanned. They know at least two are burials … that much was shared with us. But the rest? Nobody’s talking. And frankly, I don’t blame them. If they published all their findings, looters would probably be there in a heartbeat.

The ride downriver back to our starting point was miserable. The air temperature was in the mid-70s (F) but it was raining. (Yes, we brought rain ponchos.) 25 mph boat speed into a windy rain for about 45 minutes. I froze. I changed into jeans & a long-sleeved shirt when we got back to the resort, put on my lightweight jacket, and was still shivering through dinner. I spent the rest of the evening huddled under a down comforter and didn’t feel completely warm for several hours.

Our last day was sunny … and rainy … and sunny … But it afforded this gorgeous shot: 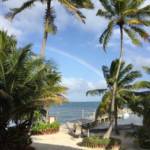 If we go back (and I say ‘if’ because there are a lot of other places in the world we want to visit), we’ll stay on the mainland. It’s much easier (and cheaper) to get to stuff to do, and you still get all the water sports you can get on the island. (Fishing for husband only. The rest don’t interest us.)