For years (my entire life, actually) I have been bug lunch. I tried everything – even the icky commercial repellents didn’t work. I’ve always known I have a weird physiology but to not have a single one work? I had pretty much resigned myself to not being able to enjoy our deck in the evenings without slapping myself silly then spending the next week scratching bug bites.

Until…a friend from Alaska (where, like Minnesota, the mosquito is the unofficial state bird) suggested a combination of clove and yarrow. Now, neither of those individually had worked but at that point, I’d try anything.

So, I combined, then diluted tinctures of clove and yarrow. Skeptically, I sprayed it on earlier this year and went to sit by my husband on the deck one night. No bites. Not a single one!

That became my go-to bug spray. However, it didn’t do a damned thing to repel the flies (houseflies, deer flies, horse flies, fly-flies) that irritated me in the garden. Rue is the best fly repellent I know. So, I tinctured some rue and added it in. Tried the new combo this morning when I went out to the garden. Not only no bites but they didn’t even buzz my head!

A compound consisting of equal parts clove, rue and yarrow tinctures. Whatever amount you use of this compound, dilute it 1:1 with distilled water.

I use a fingertip sprayer like the one below that you can find in dollar stores. It mists rather than sprays. 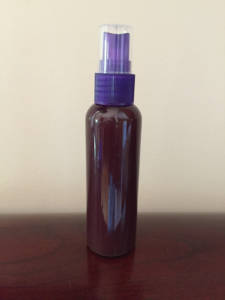 Spray all exposed skin & for good measure, mist your hair, too. It smells strongly of clove and when this aroma disappears, it’s time to respray. Depending on what I’m doing, that’s about every hour or so.

Some people are sensitive to one or all of these herbs so please do a test before going hog-wild with the spray. I also wouldn’t use it on young children, whose skin is still rather delicate.

I can now enjoy the outdoors any time of the day or night without being driven batshit crazy by flying-and-biting critters!