Over a year and a half ago, I said I was going to replace all the mulch in the garden paths with rocks garnered from our property. And I did start picking up stones and rocks. Then, once again, logic finally kicked in. Do you know how many rocks it would take to fill those paths? I could fill a 5-gallon bucket every day and still not live to see the paths covered in rocks.

So, after some searching on the net, I decided on rocks that come in bags from a local home improvement store. Two different colors. As you may be able to tell from the pic below, the center and cardinal-direction paths are white marble and the rest of it is multi-colored “river pebbles” that are mostly a curious shade of tannish-pink.

That logical slap upside the head was a godsend. Not that I weighed the bags but both husband and I think they’re around fifty pounds each. Therefore, there is approximately eight thousand pounds of rocks out there. That’s right – I spread four tons of rocks over about a two month period. Six bags here (my vehicle), twelve bags there (husband’s vehicle)… I would have never been able to hunt-and-gather that many.

The rain earlier this week (5.52 inches in four days; 3.74 of that in about 36 hours) told me my decision to do away with the cypress mulch was correct. We had horrendous downpours and an almost wave of water cascading down the hill through the garden, yet nothing washed.

What also didn’t wash was the dead leaves. I refuse to own a leaf blower so it took me a little over four hours to clean all the leaves off the paths. (Neat-freak Virgo here…) Some would sweep away but the majority of them curled themselves in and around rocks and had to be picked up by hand.

So, the end result: 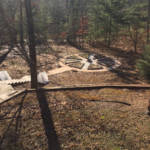 (You can see the “before” in a couple of pics in the link in the first paragraph.)

I am very happy with the results. Husband maybe not so much. The garden is now very visible from space… 😉