I was raised in the heart of the city. We lived in apartments (without even a balcony) until I was in my middle-teens. Mom hated to cook so our meals were pretty basic and apart from salt & pepper, the only herb in our house was the cinnamon sprinkled, along with sugar, on my morning toast. Gramma was a little more domestically-inclined: before they moved into an apartment when I was 8, she had fresh peppermint growing in the yard to garnish our iced tea. (I’m exaggerating. But not much.)

So, my exposure to gardens was rather limited. It didn’t bother me at all until I was well into my 30’s. After all, the spice aisle at the grocery store carried nearly every herb I could ever want. But then, the gift of hearing plants that I’d managed to ignore for a few decades really kicked in and I knew I had to play in the dirt. When we built our house in the boonies, the septic drain field was a perfect spot for a large herb garden.

Oh, I had grandiose ideas. I was going to raise enough herbs to dry and sell and I was going to make that my livelihood, retiring from the boring clickety-punch. Hubby built me a 42-foot diameter raised-bed garden. We used eco-friendly treated lumber so it didn’t have the toxic crap seeping into the soil and cypress-mulched the pathways. It was lovely. 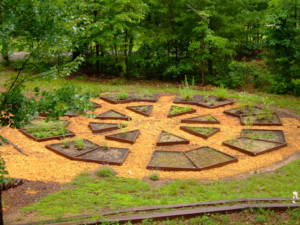 But, logic had flown out the window. There were several things I knew but obviously ignored:

I also didn’t take into account that I was getting older and some parts of my body might take exception to the hours of squatting necessary to keep the beds weed-free. After only a couple of years, I could only weed for maybe 30 minutes before my hips started complaining. Loudly.

To sort of make up for this, I planted flowers in several of the outer beds, reasoning I wouldn’t need to pay quite as much attention to them as I would the herbs. I ended up with beds of flowers and grass.

Then, the shoulder problems hit. My garden has effectively been ignored for the last two years because first one, then the other shoulder refused to move my arms enough to pull a weed more than a foot away from my hand.

As I mentioned before, the eco-friendly treated boards we used to build the beds started rotting. (They also made nice homes for termites. Ick.) Since the garden had to be rebuilt anyways, I decided it was time to downsize to something I could handle. The inner beds have been slightly enlarged & the outer beds will go away completely. I’ve been in the process of moving dirt from the outer beds to the inner whenever I have time & energy. 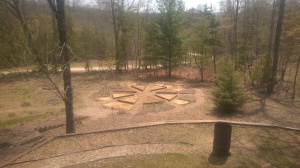 The other issue is the pathways. Living on the side of a mountain means everything is on a hillside.  Despite our attempts at diversion, there’s no way to completely stop the rain from running downhill & through the garden area. Something to do with gravity, I think? 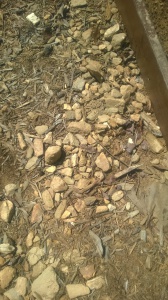 See all these rocks? They were taken from the dirt I moved from one outer bed. There are thousands like them on our property. The ones we’ve thrown into scattered piles to get them out of our way while mowing don’t move, they allow the water to flow through and over them. So, the paths are going to be made of rocks rather than mulch. It’ll be bumpy for a few years but eventually, they’ll settle down to something resembling a smooth(ish) walkway. Rocks I don’t have to buy and they decompose much more slowly than mulch.

The new beds will hold herbs I have a relationship with and use frequently. I felt bad having to discard some but hope I did a good job explaining why not all would be moved. One more bed will be built below the retaining wall to hold the rest of the dirt from the outer beds & I’ll put all the flowers there. I figure it’s going to take me another month before things will be the way I want them and a year before everything grows in & it actually looks like I hope it will.

The moral of Martin’s Fable: think before you plan. When it comes to gardening, everything takes more time and costs more than you hoped it would.