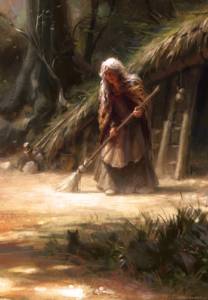 Looking out the window and seeing the clouds, Crone knew the first snow was on its way. It was time to finish putting the garden to bed for the winter. Changing from slippers to her outside shoes, she pulled on her jacket, buttoned it up, and walked outside. Someone had left a huge pile of leaves at the garden’s edge. She knew if she looked out the front door, the path through the trees would be completely clear of fallen leaves. She wished whoever piled up the leaves would put them where they were needed rather than leaving that chore to her.

Three hours later, the rosemary and rose bushes were covered with leaves and a piece of burlap to protect them. She cut back the rest of the mints, knowing they would come up again, even bushier, in the spring. These she bunched together with twine and hung from hooks in the rafters. The rest of the onions and garlic were pulled, braided, and hung right above the kitchen sink where they’d be handy. Everything else would survive, as long as the winter wasn’t overly harsh, which it had never seemed to be in her time at the house.

Crone’s knees, hips, and hands were complaining by the time the outside chores were finished and it was nearly dark, anyway. After washing up, she stripped off her clothes, worked her spicy-smelling arthritis rub into the affected joints, and re-dressed. Emptying the kettle of its dregs, she rinsed and filled it with fresh water and a handful of a black tea-orange peel combination she favored. When her tea had brewed, she put a cup of it on the table next to her chair, settled herself, and picked up the book she had been reading.

The tale of derring-do involved factions of elves fighting for supremacy in a far-off kingdom. While she enjoyed the story, it didn’t seem to hold her attention the way it had the previous night. She ate a bowl of her stew, set the rest aside on the counter to be reheated the next day, and decided to turn in early. A whispered, “bedtime,” and the fire went from a merry blaze to a quiet glow. She knew as soon as her eyes opened the next morning, the flames would rise without any effort on her part. It was nice having a magical fire, she mused. She didn’t have to worry about chopping wood (which she knew she didn’t have the strength for) or continually throwing logs on it to keep it going.

The next morning, Lily arrived with a large jar of whatever herb Crone’s morning drink was made of. “I will sleep, now. This should last until everything wakes in the spring.” With another peck on Crone’s cheek, Lily disappeared. Crone knew she would see none of her friends until the trees started leafing out…several months hence.

Later that afternoon, snow began to fall with a whisper. By the time she blew the candle out, everything outside was a pristine white and the moonbeams made everything glitter. The snow would melt in the morning sun, Crone knew, but this heralded the beginnings of winter. It would be quieter without visitors from the woods, but it was also her busiest time of the year. The stack of papers on the counter would consist almost exclusively of requests for hyssop and horehound syrup for sore throats, ginger tea for stuffy noses, elderberry and boneset tea for the flu, and her arthritis rub.

The days turned into weeks, which turned into months. She rose in the morning, drank her “coffee” while looking out the window at the snow covering her sleeping friends’ homes, prepared remedies for winter maladies, put together the occasional charm for nightmares or protection, and read.

When the first buds were visible on the trees, she knew it was only a matter of days before Lily would visit. Lily, as the genius loci was able to wake earlier than the others. Soon after, though, Gal, Haw, Glynn, and the others would come by. They were wood sprites, occupying some of the trees in the woods. They never visited long because they couldn’t be parted from their trees for more than a half hour or so, which suited Crone. Peering into the woods, she thought she saw a few new saplings. It looked like there might be children this year, too.

As soon as she saw leaves rather than buds, it was time to open the garden. It was days of backbreaking work, clearing out leaves and other detritus, uncovering the rose and rosemary bushes, augmenting the soil from the compost heap, planting seeds for annuals… Two weeks later, she surveyed her work with satisfaction while massaging a particularly painful spot on her lower back.

“The garden is looking well,” Lily said from her side.

Crone jumped. “I do wish you’d announce your presence.”

Lily materialized with a laugh. “I am sorry. I forget. I have a present for you.” She looked beyond the garden to the woods and beckoned.

Crone’s eyes followed Lily’s and saw a large black cat emerge from the trees. It delicately picked its way through the garden, avoiding all plants, and came to sit at Crone’s feet, looking up expectantly.

“I know you dislike your own kind but I have felt your loneliness,” Lily said. “I thought a creature such as this might be a good companion. He tells me he is called Tom and is willing to live with you.”

Crone squatted down, allowed Tom to sniff her hand, then gave him a scratch behind the ears. Tom purred.

“I thank you,” Crone said. “But I do not believe he eats the same things I do. How do I feed him?”

“You need have no worries on that account. He will feed himself,” Lily replied.

So began the companionship of Crone and Tom. Tom slept at the foot of her bed each night, disappeared outside for the better part of the day, regardless of weather, and returned before sunset. He never bothered plants in the garden (even the catnip!), or the fresh ones laid in the basket until she could get them ready for drying. He was a most unusual cat, Crone mused. But she enjoyed his company, nevertheless.

Summer brought languid days. She got the garden work done in the mornings before the sun rose above the treetops, hand-watering some plants when the rain wasn’t as plentiful, talking to them all to encourage strength and growth. Flowers were snipped just as they opened; herbs that were needed fresh were cut. After the garden, she finished whatever orders or other work that needed the heat of a fire quickly, and spent the rest of the daylight hours sitting on the front porch, sipping a lemon balm infusion while watching a fresh batch brew in a jar set out on the path where it would get full sun. Tom came home earlier on these scorching days, preferring to laze in the shade of the covered porch rather than prowl through the woods and beyond.

Autumn rolled around and it was time to start readying everything for winter. As she harvested, she thanked the plants for the food and medicine they provided. The rafters became full of bunched herbs hung for drying; the porch floor was covered with frames of stretched cheesecloth holding drying leaves, roots, and berries; and the counter and table were full of vegetables and fruit as Crone labored to put everything up to feed herself over the winter.

As the autumn wore on, she took down the dried herbs and crumbled them into the appropriate jars. Stems, where they weren’t wanted, were thrown onto the compost heap, which got a good turn to mix them in. The herbs on the frames were also gathered and put into jars in their time – the frames going back into their storage spot under the porch.

The largest pot was put to use making soap. It took a whole day of carefully stirring lye into water and that mixture into warm oil, adding whatever herb grabbed her fancy for fragrance, then ladling it into two wooden molds to set for a few weeks. The molds she carefully placed under the table where they would be out of the way. Once cured, she would cut it into bars, yielding enough for an entire year’s worth of baths, hair washing, and laundry.

The seasons turned once again. Soon, it was winter and she and Tom spent hours sitting by the fire. He would leave the house in the morning as she drank her “coffee,” but return only a few hours later – about the time she had finished her work for the day. He’d curl up next to her feet on the ottoman while she read or watch her with sleepy eyes as she prepared her meals.