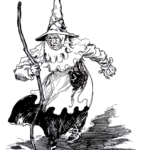 “Magic is the solution to all problems.” Not. If that were the case, every experienced witch would have won the lottery; they and all their family and friends would be in perfect health (and probably immortal because who wants to lose a loved one?); there would never be any disagreements (world peace, anyone?); etc., etc., ad nauseum.

I see this so much in new witches, especially young ones who are looking for a quick fix to all their woes, but where I find myself explaining and educating the most is to non-witches. (Duh. They don’t understand how magic works because all they know is what the movies show them. “We don’t sparkle” could be applied to us as well as vampires!) Case in point:

A neighbor (the only one who doesn’t mind living near a witch and therefore takes care of our cats when we’re away) has been diagnosed with congestive heart failure. We were talking about it after my husband and I returned from vacation. He asked, “isn’t there something you can do, you know, woo-woo, to cure me?”

My reply was, “Diet and exercise.”

Me: “You know the phrase, ‘God helps those who help themselves?’ Same thing with magic. My Universe is like your god. If you don’t do the work to get well and maintain your health, why waste the energy? It just becomes a vicious cycle – your body heals itself for a while but because you haven’t done anything to prevent a recurrence, the symptoms come back. You ask me to do another spell, it works for a while, the symptoms come back. See where I’m going with this?”

Me: “Listen, neighbor. Prove to me you’re willing to follow doctors orders and I’ll do what I can to help. Call me in a month after your next doctor’s appointment and we’ll talk, okay?”

It’s been six weeks and I haven’t heard a peep. CHF is nothing to screw around with and I have a feeling I’ll be losing this neighbor (who is younger than me) sooner rather than later. It makes me sad.

To be frank, most problems can be solved without the use of magic. It’s usually not easy, but anything worthwhile rarely is. To me, magic is just another tool in my arsenal – a tool to be used either as an aid in what needs to be done or, as a last resort, when mundane methods fail. (I’m getting to the ‘last resort’ stage on one issue.) Am I glad I have that extra tool? You bet. But outcomes are more lasting if the mundane is done either first or alongside the magical.

So, next time you have a problem, look at all the mundane things that could/should be done before resorting to magic. You (and your resident witch) will be happier in the long run.