As many of you may know, my garden is a medicine wheel. Or just a wheel. After I downsized it last year, it’s 8 triangular beds with the interior paths being the “spokes” and the outer path the “tire”. I’ve long wanted a fountain at the hub but finding something I liked was an issue.

I love cast iron. There’s a lot of it in my house and not just in the kitchen. So, something cast iron would be good, right? Then, how to get the fountain part of the hub. A pump requires electricity and I wasn’t about to run a line from the house all the way out there. Solar fountains are nice but the solar panels I’d seen sit outside the fountain, have a cord running to them, and detract from the look. (I’m a neat freak.)

Earlier this year in one of my jaunts around the Internet, I found a floating solar fountain pump. The top of the whole thing is the solar panel. No need to run wires, either from the house or outside the fountain well. In addition, it provides something for the bees to perch on while getting a drink, although I have plenty of wine corks for that. But would it work?

What to use for the well? I finally found something I liked at a local flea market a couple of months ago.

My last chore was to put everything together so it looked as I had envisioned it. That meant hauling some rather large rocks from an old fire pit on the other side of our property. I’m glad we own a hand truck. A couple of them weigh almost as much as I do.

Here’s the result … even though my level says everything is good, the fountain likes to float over to one side. 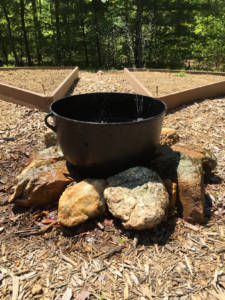 And if the neighbors get a little twitterpated about my “cauldron” (it’s actually a wash tub), well … 😀