Honey to the Rescue!

I normally have mild spring and fall allergies, fall being just a little worse. A little sniffing, a little sneezing, a little itchy eyes for a week or so, and I’m back to normal. I don’t even consider them bad enough to take anything. Usually.

Not this year. Whatever was blooming, on top of the dust from dying leaves and drought-dry everything else, made me miserable for a month. The allergies then (I think) turned into a full-blown sinus infection. On top of that, my immune system was (and is) trying to battle the germs from husband’s fall cold (which the stubborn man refuses to treat, even just to ease or shorten the symptoms).

Nothing I tried worked. The inflammation and congestion in my sinuses stayed firmly put no matter what herbal allies went to battle for me. Desperate, I did some internet searching.

And came across mention of not just regular honey*, but Manuka honey. From New Zealand. Virtually everything I read was anecdotal evidence. A lot of it was taking the properties of regular honey and extrapolating possible results due to the higher nutritional content of Manuka honey. (There are few clinical trials on regular honey, much less this type.) But, as I said, I was desperate. So, I ordered some of this holy-shit-that’s-expensive honey (UMF 16 for medicinal purposes) and ate my first tablespoon of it the night it arrived. (It’s not quite as sweet as regular honey and is much thicker, in case you’re wondering.) 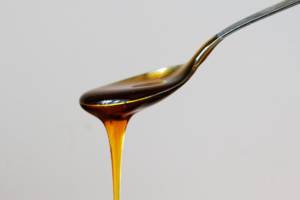 Another tablespoon the next morning and evening, repeat. Within 48 hours, blowing my nose became a productive thing rather than a waste of tissue. Five days later (two tablespoons per day), my face no longer feels like a brick is laying on it (ignore the properties of gravity – you know what I mean). So, I’m going to say my investment was worth it, and continue to take this twice a day until the symptoms completely subside. Once I feel healthy again, I’ll reduce it to once per day as a prophylactic measure during cold and flu season.

YMMV but if all else fails, do some searching, read up on this stuff, and make an investment. You might thank me. (Or not.)

*I don’t mean that crap in the grocery store that comes in cute little plastic bears. That’s been so processed it’s only good for flavoring. I mean the stuff you get from the farmer’s market or even a local beekeeper that’s not processed.