How I Spent My Summer…Weekend

I am pissed. And my back & hips hurt like crazy – even after more or less relaxing yesterday.

Over two years ago, I decided it was time to do paths from the house to the garden steps and down to the compost bin. We have a chigger problem here and I was getting tired of having to slather on repellent even for the quick trip to the compost bin. It was either that or one or more of those little buggers would find me in the 30-second trip.

I have this thing about blending into our forest surroundings as best we can.  So, I decided the paths I wanted should be stone and the best thing I could find was slate. Not that I really knew what I was doing but I started laying it on my own: 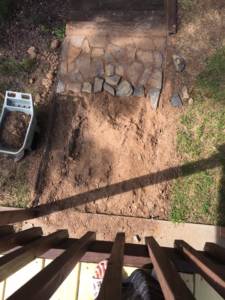 It was back-breaking work (slate is heavy) but I was determined I’d get it done. Then I discovered the stones weren’t staying put in the dirt. They needed to be “fixed” there. On top of that, although chiggers are supposed to live in grassy areas, they apparently don’t mind dirt. So, I talked with my (now former) handyman about laying the slate in concrete that had been dyed dirt color. I knew it was possible – I’d seen it.

What the (now former) handyman failed to tell me was he didn’t know how to do that and rather than finding someone who could (I would’ve paid him a fee for doing so), determined to do it himself.

Two years ago last week, they poured a layer of concrete. I was told the stones would be laid and fixed in place with dyed mortar on top of that. Three weeks later, during the eclipse, this is what one of them looked like: 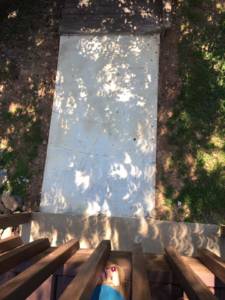 Doesn’t really “blend”, does it?

Then he disappeared. For months. Finally, in June 2018, he came and laid the stones – while I wasn’t here. The mortar wasn’t dyed dark enough – it was tan. I don’t live in the desert. And the stones were too far apart. There was nothing I could do about the spacing at that point but we talked about it and decided he’d hand-paint concrete dye to get it dark enough.

Then he disappeared again. I got him to come by in May and pressure-wash everything so we could start the re-staining process (an ongoing chore with a wood-sided house and wood retaining walls and stairs that get a lot of sun) and he promised to come “soon” to stain the paths.

I finally got sick of waiting on him. The concrete dye he was going to use only comes in 1-gallon containers and by my calculations, it was only going to take about a cup of dye to do the whole thing because the dye would have to be severely diluted. I decided, “screw it” and since I had the wood stain out for the stairs and retaining walls, thought to test it on the concrete. Full sun and a couple of rain showers later, it was still as dark as it had been.

So, for three days, I sat on the ground, bent over with an artist’s brush to outline the stones and a larger one for the gaps and stained the walkways (and stairs – husband’s doing the retaining walls). 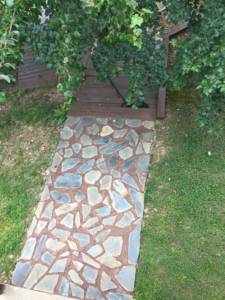 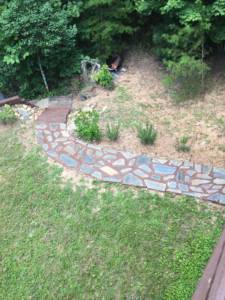 Is it what I wanted? No. Will it suffice? It will have to. I don’t want to spend the money to have it all torn out and re-done properly. Will the stain last? Probably about as long as it does on the wood – about three years. I’m not looking forward to re-doing it but such is life.