Interview with a Witch: Deborah Blake

As I mentioned in my last post, I’ve met some interesting witches on the ‘Net over the last several years & thought I’d ask them some questions to get to know them better. Next up: Deborah Blake, whose new novel, Wickedly Wonderful, hit the shelves on Tuesday. Keep reading…there’s a surprise for you at the end! 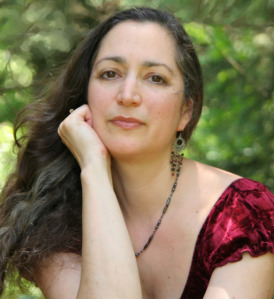 When did you start writing and what prompted you to do so? I have really been writing all my life. I think I started my first “novel” when I was in 6th grade. (I believe it was something about sentient cats in a spaceship and I wrote it during most of my classes when I should have been paying attention.) There were many times in my adult life when I started seriously working on writing and then gave up after a few rejections. I never did finish a novel. Then I sold my first nonfiction book to Llewellyn in 2005 (it came out in 2007) and said to myself, “Ha! You CAN finish a book! No more excuses!” and started working on novels again. Three years after that I got an agent, and three years after signing with her, we sold my Baba Yaga series to Berkley. (And my 8th nonfiction book will be out next March.)

For those who don’t know, Baba Yaga is a witch (some say a trio of witches with the same name) out of Slavic folklore. How/why did you pick her as the protagonist(s) in your current fiction series?  I wanted to write an updated fairy tale story (I love those when other people do them), but I didn’t want to use something like Beauty and the Beast or Cinderella that had been retold a million times. And of course, I love a witch as my protagonist, but that meant I had to find a fairy tale witch that wasn’t a two-dimensional bad guy. Baba Yaga was perfect, because she’s not as well known, and because the tales about her were detailed and interesting; she’s neither good nor evil, but she can be quite cruel if a seeker’s heart is not true.

Next I just have to ask about my favorite character in the first Baba Yaga book (Wickedly Dangerous), Chudo-Yudo. Will we see him again? Chudo-Yudo is everyone’s favorite! Who wouldn’t like to have a traveling companion who was a dragon magically disguised as a dog. Our first Baba Yaga, Barbara Yager from Wickedly Dangerous, has a Chudo-Yudo who looks like a huge white pit bull. You will definitely catch glimpses of him in future stories, but in Wickedly Wonderful, Beka Yancy’s tale, you will get to meet HER Chudo-Yudo, who she calls Chewie, and who is disguised as a gigantic black Newfoundland. [DJ: Oh my. I love Newfies!]

How do you balance your writing between fiction and non-fiction? Most of the time, I write them both about equally. Since that first book (Circle, Coven & Grove), I have written one nonfiction and one fiction book a year. These days, I’m moving more in the direction of the fiction, so it remains to be seen if any more nonfiction books yell at me to write them. I am, however, working on a great new project for Llewellyn—a tarot deck! (I’m writing the book for it, not doing the art. Nobody wants that.)

Do you have a favorite book on witchcraft – perhaps one that influenced you? So many favorites! But probably the one that influenced me the most was Marion Weinstein’s classic, Positive Magic. It’s not a 101 book—there’s very little about how to cast spells, or what color candles to use. Mostly it is about what magic really is, and how we can use it to make our lives and the world better. I recommend it highly.

What was the hardest lesson you had to learn – one that you credit your path for teaching you? It’s one I’m still struggling with, really, although I hope I’m a little better at it than I used to be: patience and faith. I’m someone who works really hard to make things happen, and also kind of a worrier, but I’ve learned that sometimes you have to just do your best and then let go, and have faith that things will work out the way they are supposed to. (Which isn’t, I might add, the same thing as “the way you want them to” some of the time.)

How does being a witch help you in everyday life? See question six. (Laugh.) To me, being a witch is all about connection—with the gods, with nature, with other people, and with myself. I think all of those connections have gotten deeper along with my practice. Plus, of course, I can cast spells…

What is one piece of advice you’d give someone new to the witchcraft path? Witchcraft is a spiritual path that is mainly focused on becoming the best human being (and witch) that you can be. Don’t forget to focus on that, and not get too distracted by the shiny fun stuff like magic and spells and cool tools.

What are two things about you not too many people know? Well, I’m pretty sure most people know I love cats! But they may not realize I also really like dogs (even though I was afraid of them as a kid). My cats would never put up with me getting one (Magic in particular would probably kill me in my sleep), but I am often tempted. And most people don’t know that I am also a professional jewelry maker—I’ve been selling semi-precious gemstone jewelry for about 25 years, although I do it less now that the writing has taken over my life. I occasionally post pictures of the jewelry I make on Facebook or my blog, if people are curious.

And finally, coffee or tea? I used to be a major tea drinker, and I have a collection of teapots and lots and lots of different teas in my cupboards. But these days I mostly start my days with mocha (hot chocolate with a cup of coffee mixed in).

Deborah Blake is a Witch who writes nonfiction and fiction. Author of 8 books from Llewellyn, including The Witch’s Broom (2014) and Everyday Witchcraft (2015) and The Baba Yaga series from Berkley Romance (Wickedly Magical, Wickedly Dangerous, Wickedly Wonderful). Read her blog here, follow her on Twitter @deborahblake, or follow her on Facebook. 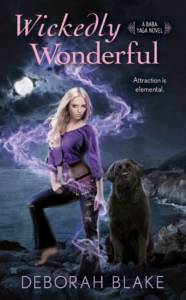 Now for the good stuff!

Deborah will send one autographed copy of Wickedly Wonderful (plus some cool swag) to one lucky winner from this blog post! Unfortunately, she has to limit it to a US mailing address. To enter, simply leave a comment below. (The blog software requires you to enter an email address that only I can see – be sure to use a valid one!) Around noon on Monday, 8th December, I’ll draw one name from the hat & contact the winner via email for a snail mail addy to pass on to Deborah. Good luck!