Interview with a Witch: Laura Perry

One in a continuing series of interviews with cool people I’ve met.

Laura and I first met a bunch of years ago…in a Facebook group, I think. We discovered our mutual love of herbs (and other things), then discovered we lived fairly close to each other – a little over an hour apart which, in the Facebook world, is next door. She’s now a good friend and my editor! On to the questions: 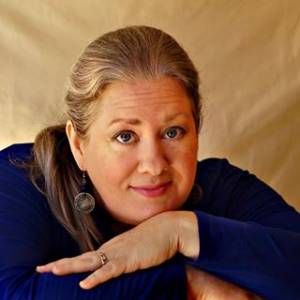 When did you start writing and what inspired you to do so?

I’ve always written stories of one sort or another, since I was a child, but I think you’re asking about more serious writing intended for publication. If you discount the amazing pioneer tale of Nine-in-a-Row Johnny that I wrote in fourth grade (I’ll inflict the story on you only by request), I first began writing in earnest when I became involved with the local Pagan community in the early 1990s. It was back then that I created the series of rituals that eventually became the core of Ariadne’s Thread. That was effectively the first non-fiction book I ever wrote, even though it wasn’t the first one I published. It was also around that time that I began writing magical and historical fiction, inspired by past life memories, travel, and the “sparkles” I encountered in personal and community rituals.

What prompted you to rediscover/reconstruct the Minoan spirituality path?

I’ve been mildly obsessed with the ancient Minoans ever since my 9th grade art history teacher showed my class a photo of the Bull Leaper fresco from Knossos. But I finally began taking the Minoan path seriously in my own spiritual life during that time I mentioned above, in question #1. As part of my work toward my second Wiccan degree, I was given the assignment to choose any pantheon I wanted and use it as the focus for writing a year’s worth of seasonal rituals and a lifetime’s worth of rites of passage. Though it took a little while for the universe to get the message through my thick skull, eventually I realized I needed to focus on the Minoans for that project. Doing that work opened up to me the idea of the Minoan pantheon as the center of my spirituality, which was a big deal for me because at the time there were virtually no resources at all for that sort of thing. So I did what most bootstrapping Pagans tend to do in that kind of situation: I couldn’t find the resources I wanted, so I created them. I was overjoyed to eventually discover other people who were interested in the same things, and now we’re walking the path of Modern Minoan Paganism together.

How does witchcraft help you in everyday life?

It does two things for me. First, it reminds me that there’s more to the world than just the objects and effects our five material senses can detect. We get so caught up in the modern materialist worldview sometimes, I think it’s good to remember that there’s also magic, and spirit, and far more depth to the world than any scientific instrument will ever be able to measure.

Second, it gives me a sense of power in my own life. Witchcraft has long been the purview of the disempowered segments of the population: women, minorities, the poor, the oppressed. Though I’m certainly not downtrodden in any real way, there are times when no amount of mundane activity will overcome a problem. Obviously, no amount of magic is going to help if I don’t get my butt in gear and do the material-world work first. But sometimes it’s the key to tipping the dial over just far enough to achieve a goal that I might not have been able to reach otherwise.

Do you have a routine to get you into the writing/art mood? Is it different for each?

I can manage non-fiction writing pretty much at the drop of a hat. I wrote my first two published non-fiction works, Ancient Spellcraft and The Wiccan Wellness Book, at the dining table with a toddler running around the house. So I got really good at learning to focus and work in 15- to 20-minute increments, with no special kind of surroundings, for that kind of writing.

Fiction and art, though, are different. Both of them have technical aspects that require the same kind of focus and diligence as non-fiction, but they also have creative aspects that are a little harder to just turn on and off like a faucet. So I have an office/studio now, with a door that closes (yay!) where I can get into the headspace for more creative work. Just being there, especially sitting at my art table, shifts me to that kind of mood. I’ve also had some good experiences the past few months in a new location. Due to logistical issues, I’m spending several days a week on campus while my daughter takes college courses. It turns out, the carrels in the library are an excellent place to just “fall into” the world of the Minoan-themed novel I’m working on.

I’m still in love with your novels Jaguar Sky and The Bed. What was the inspiration behind them?

Jaguar Sky is the direct result of a trip I took to visit some of the Maya sacred sites in Belize. Though the details of the story didn’t really congeal until I came back, while I was there, I began to imagine the characters and the circumstances of their journey to Central America. I’ve actually visited the places where Maddie and the rest of the team do their archaeology and where she has some very unusual encounters with all kinds of people, living and dead.

The Bed began almost on a whim. I was in an antique shop one day and I heard a woman talking with her friend about how she didn’t like buying antique furniture because of a fear that it might somehow be haunted. I must be a born-and-bred writer, because my first thought upon hearing her comment was, “That would make a great story.” So I wrote a novel about a woman who buys an antique bed that comes with a matching nightstand and a not-exactly-matching, and somewhat magical, ghost.

Finally, I know the answer to this because we joke back & forth, but coffee or tea?

Tea. Most of the time, anyway. I’ve been known to have a cup of coffee if we go out for brunch. And you’ll probably cringe, but I also love decaf after a nice dinner.

Laura just completely updated The Wiccan Wellness Book and the second edition is now available in various formats. Clicking on the book cover will take you to the page on her website that not only describes the contents, but gives you direct links. 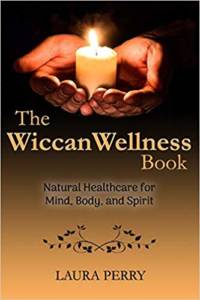 Where to find Laura on the net: