The local tourism board posted the following picture on Facebook today 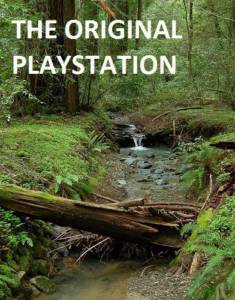 and it got me to thinking:

Magic is all about Nature. How do the younger generations do magic when they seemingly spend all their free time in front of a video game? How does one feel the Elements, much less work with them, if all one knows is electricity and electronics?

As a child, if I wasn’t in a classroom or doing chores, I was outside if the weather permitted. If, for some odd reason, I didn’t want to go outside to play on a nice day, I was told in no uncertain terms to get my ass out of the house.  I made mud pies (later, roads in the dirt or mud for my trucks), wove chains of daisies, climbed trees, piled & jumped in leaves, made snow angels and snowmen … In other words, I interacted with Nature.

As a young adult, I was stuck in an office job and lived in a characterless apartment. But on nice days, I ate my lunch outside. I went for walks in the evening. I rode my bicycle on the weekends (once recovered from the night before, that is). I went primitive camping with my friends. When Pac-Man made its appearance, I had no interest in sitting in front of a glorified television screen. It was a waste of time (and at 25¢ a game, money).

I inherited my dislike of cooking from my mother. That never deterred me from having useful plants in the apartment: an Aloe for when I burned myself, Peppermint to garnish my iced tea in the summer or to soothe an upset stomach, Rosemary just because I like it. I see a lot of kids who think of an herb as something that comes in a jar or bottle. Mom gets them in the spice aisle at the grocery store. How do they get to know plants? (Before you climb all over me, I know there are those out there who love to cook and grow some of their own herbs.)

Today, the plethora of video games has kids not only not knowing what Nature is, they’re sitting on their butts moving only their fingers and eyes. Can you say childhood obesity epidemic? The National Football League has a “Play 60” program to get kids to play/be active sixty minutes a day. Only an hour?

But I digress. How do the younger generations know real magic? Not the stuff of fantasy (although I use Fire, I can’t throw a fireball to save my life) but utilizing unseen Force? How do they know how to use their own imagination to create a fantasy world when some programmer has done it all for them? This imagination is the stepping-stone to understanding the Unseen World of Magic.

How do they do it? Perhaps some of you younger witches can enlighten me.