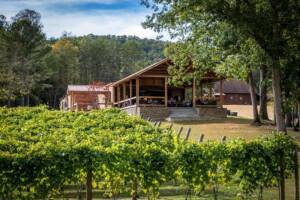 Hi. El here again, talking about living in the mountains of north Georgia. Last time, I told you why I wanted to move here. Now, I’ll talk about what keeps me here. (Besides the peace and quiet, that is.)

If you read DJ’s book about me, you’ll know I spent nearly thirty years being a socialite wife. So yes, I became accustomed to some of the “finer things in life.” Honestly, I didn’t give that up when I moved!

The closest city to me is Blue Ridge. It began as a railroad town in 1886 but, due to the proximity of “healthful” mineral springs, as well as the Toccoa River for fishing and other aquatic pursuits, became a tourist town. The county still derives most of its income from tourism.

Today, Blue Ridge boasts some of the best restaurants I’ve ever eaten in. The cuisine ranges from typical bar food (hamburgers, wings, etc.), to bar food with an upscale twist, to barbeque, to gourmet American. Driving just fifteen minutes either toward Morganton or McCaysville, there are other good restaurants, too, and none of them are part of a chain!

Reading the book, you’ll also discover I like my wine. There are two wineries in Fannin County, and more within an hour’s drive. I’ve visited both of those local to me and I might be single-handedly keeping them in business… For the beer crowd, there are five craft breweries, four in or close to downtown Blue Ridge.

Like to shop? You can do that, too. Jewelry, clothing, antiques, local crafts. It’s all there, most along West Main Street downtown. If you feel like driving about fifteen minutes north, McCaysville has more of the same. (There’s a much more interesting way to get to McCaysville from Blue Ridge than travelling Highway 5 in a car. I’ll talk about that next time.)

I have always liked live theater and although I left the iconic Fox Theater behind in Atlanta, I didn’t sacrifice a lot. The Blue Ridge Community Theater puts on great performances of plays and sometimes even musicals.

Don’t forget art! There are several galleries in downtown Blue Ridge that show the work of local artists: painters, potters, jewelers, and the like. There’s also the Blue Ridge Mountain Arts Association, housed in the historic courthouse, which has exhibits as well as classes. They also host an annual Writers’ Conference, bringing in big-name keynote speakers.

The best part is all this is fifteen minutes from home. Back in Atlanta, my drive time to almost anything of interest would have been at least a half hour – or more if traffic is horrible (which it usually is). I really didn’t give up anything leaving the big city!