No, I haven’t changed my personality. 😉

As background, for years I’ve worn several things on a necklace – always under my shirt. (I have conservative clients. They wouldn’t understand.) However, my thoughts on some things have changed and what I wore no longer really had meaning to me. It was time for something new.

I really like the idea of a pentacle (the four elements plus spirit, surrounded by will) but wearing one of those openly seems to immediately identify you as Wiccan, which I certainly am not. But what to wear?

If you’ve been following along on my Facebook page, you know I’ve been learning the Herbal Tarot. Early on, I set the companion book aside because it’s geared toward herbalists who consult. I don’t. But one thing in the introduction (page ten) struck home: “[…] the ancient Greek letter theta. The circle divided into two halves signifies spirit-matter held together by the underlying principle of Divine Spirit.” I interpreted that a little differently. Body and mind, surrounded by spirit – the principle of holistic health (and witchcraft, if you think about it).

The text shows the lowercase theta. If I’d been thinking a little harder, the upper case theta would more completely show that connection – it has a little space between the horizontal bar and the surrounding circle. There is leakage between the mind and body. But then the charm would’ve had to have a back, been heavier, and I wouldn’t have liked it as much.

It took about five seconds to decide where I was going to get my new charm. My friend, Jen, introduced me to the work of Aidan Wachter several years ago and I’ve been in love with his work since. About a month later, this arrived in the mail: 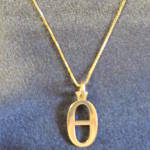 Now I have a charm I can wear on the outside of my clothes, with an explanation even the most conservative of people will understand. Nestled next to it is my father-in-law/husband’s first wedding ring. Yes, there’s a story there, too, but only the fact that it was my husband’s needs to be told.