I’ve had my raised garden beds for quite a few years and, although I know what’s in the beds, others don’t. So, they need to be marked, right? Every single garden marker I’ve tried has been a write-on sort, and no matter the material or ink used, the writing has faded in the sun after less than one season. (Not to mention getting pulled up by the local critters who don’t seem to care what’s in the bed they’re eating out of.)

Sometime last fall, I saw something somewhere on the Internet that gave me an idea. So, I went shopping (on the ‘Net, of course). Below is an example (lousy photo) of my new & improved markers: 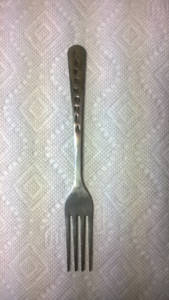 I bought some el-cheapo restaurant forks (weakling me can bend them) and a set of metal stamps.The forks needed to be flattened so I stuck them sideways in a vise and squeezed them very-nearly flat.

Once I got the hang of stamping (after smashing my thumb with a mallet, necessitating a hiatus until it healed), I sprayed some black paint on the shaft & quickly wiped it off so the paint is only down in the stamp. Obviously not professional work but hey, it gets the idea across. I even found a skull-and-crossbones stamp and, although small, that’s at the top of the markers for baneful plants. The paint will probably fade but the stamping won’t. I can re-spray them if necessary.

I’m gonna stick a fork in it when I’m done planting!