Bear with me…this is going to be a long one because I have so much to share!

As many of you are aware, friends of mine host the New Orleans Witches Ball. I went to the first one in 2011 and hadn’t been back until a chum of mine (from junior high – yes, we’ve been friends that long) said she wanted to go this year. And go we did!

We flew in on Friday, dropped our bags at the hotel and wandered the Quarter, shopping. My friend hadn’t closely looked at the forecast and had packed for temperatures a good ten degrees cooler than it actually was. So, clothes. (I actually found a top I liked, too.)  Then it was time for the Witches’ Night Out. Sooo much fun, seeing friends for the first time in four years! Facebook just isn’t the same, y’know? Afterwards, we treated ourselves and took a pedicab from the Quarter all the way back to our hotel (which was in the Warehouse District). Everyone dresses up for Halloween in New Orleans! 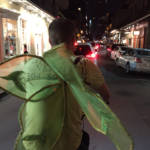 That’s a butterfly, not a fairy!

Saturday morning was the first of our tours. When I was there four years ago, I wanted to pay my respects to Marie Laveau but arrived at St. Louis Cemetery #1 fifteen minutes after they’d closed the gates. After multiple vandalism incidents, the Diocese has since declared that you either need to be part of an authorized tour group or have family members there to enter. Frustrating, but I don’t blame them. So, we booked a tour with Haunted History Tours. I highly recommend them and if you can get Jill as your tour guide, all the better! 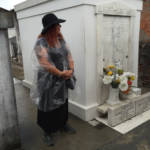 Jill in front of one of the tombs. Yes, it rained on & off during the entire tour.

Honestly? I was glad I had a guide. That place is a rabbit warren and I would have never found my way around. Remembering that marble needs to be shipped into New Orleans, some of the tombs were amazing. Like this one: 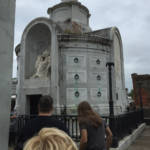 Many people know that Nicholas Cage has been a friend to the City for years, including a lot of assistance after Katrina. He apparently likes the place so much he wants to be buried there and, in anticipation, built his own tomb in that famous cemetery: 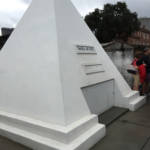 Ostentatious but if you’ve got it, flaunt it, I guess.

Then there’s the Lady, Marie Laveau. 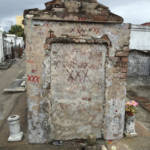 This is not her tomb, although fake tour guides would have you think so. 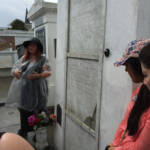 This is the correct tomb. 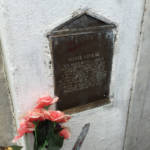 Plaque about her on the lower left of the tomb.

A yummy lunch, then more wandering the Quarter. Although you do have to watch where you’re walking (the sidewalks can be uneven), it does pay to look up: 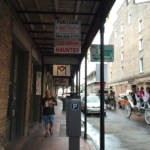 I wonder if you pay extra for the ghost?

One of the stops I had to make was the Pharmacy Museum. (Geez, I wonder why.) What a wealth of history! 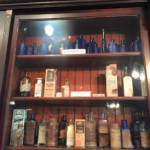 Notice the poison bottles at the top? 😉 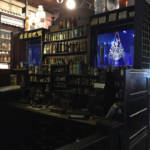 I’m not usually one for souvenirs but when we were walking on Friday, I saw something in a shop window I had to have. I collect mice figurines (have done so since I was a teenager) and due to my large collection, it takes something special for me to want it. So, we returned to the silversmith’s shop on Saturday: 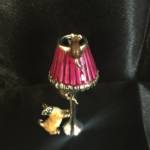 Then it was time to head back to the hotel to get ready for the Ball. I’ve never done such an elaborate costume before. When the theme came out, “Witches’ Frolic” and it was suggested that historical figures would be good, I dragged out my copy of Judika Illes’ The Weiser’s Field Guide to Witches. Catherine de’ Medici popped out at me. (Don’t think she was a witch? Read the entry.) One custom-made Renaissance Faire costume from Majestic Velvets (that, by the way, was gorgeous and fit like a dream) and around 2,500 little fucking pearls later: 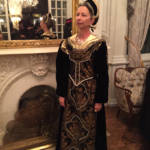 This isn’t even close to as elaborate as de’ Medici’s dresses. I feel so sorry for her dressmakers’ eyes!

Despite all the rain, the Ball went on. Proof positive that witches don’t melt when we get wet! The Elms Mansion tented their entire patio so at least we didn’t have to dodge umbrellas! I didn’t take many pics there (I was too busy talking with people) but here’s one of Storm Faerywolf leading the ritual: 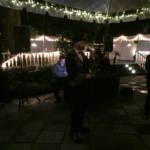 Someone recorded the ritual and you can watch it at his Facebook page.

You know rituals aren’t my thing but the energy raised was amazing!

All too soon, it was time to depart. But I’ll tell ya, I was glad to see my bed, even if it was the hotel bed. I don’t do late nights well anymore!

I am a little smarter in my old age and had booked a bus tour for Sunday. (With a somewhat later departure, too. 😉 ) This one was through Cajun Encounters and that, too, was soooo interesting. (Rene was our guide and I highly recommend him, too!) This took us all around New Orleans, showing not only a lot of historical stuff but also what’s been accomplished since Katrina and how much more there’s yet to be done. The pics I shot weren’t that good – it was raining & they were through the bus window so it’s tough to see what I was recording. So, I won’t inflict my poor photography skills on you here.

Dinner Sunday was someplace way away from the “action” but delicious. Then, back to the Quarter and Frenchman Street for some awesome music. Like jazz? Blues? Zydeco? You’ll find it all there played by local musicians. Knowing we had a walking tour on Monday, I chair-danced to try to save my poor hips.

Monday was a walking tour through the Garden District. I don’t mean to be blasé but I’ve been all around both Charleston and Savannah multiple times. The New Orleans Garden District is just like their historical districts. That said, we did get to go inside one mansion, operated by the Ladies’ Opera Guild: 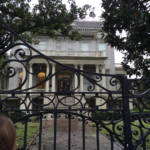 Even on today’s market, expensive! 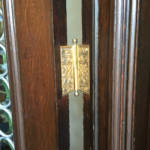 The one thing that impressed me – the hinges on the front door.

Naturally, we went by some famous peoples’ homes but to me, enh. People gotta live somewhere…

More walking in the Quarter, complete with the de rigeur visit to Café du Monde, dinner with my NOLA peeps that evening (and another trip to the Café) and it was time to head back to the hotel to smash everything I’d brought plus everything I’d gained into my suitcase. I made it!

Although I love seeing old friends and making new, it was blissful to get back to the quiet of the country, my own bed and my furry bedfellows. Mischa hasn’t left me alone since I’ve gotten home, so I think I was missed. 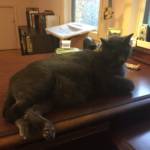 As I’m writing this…

If you’ve never been to New Orleans, you gotta go!