Nutmeg: A Good and Bad Spice

One of my kids gave me whole nutmegs for Christmas. I am in heaven! It’s one of my favorite spices … if a recipe calls for cinnamon, you can bet your bippy I’m going to add a pinch of nutmeg in there, too. Use it medicinally? Not so much. I like my body fully functional, thank you.

I realized I hadn’t said anything here about this tasty spice so will share what I’ve got written thus far in my upcoming book: 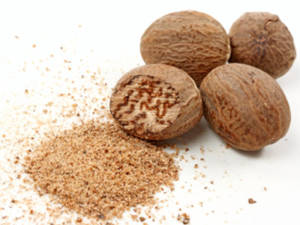 Description (Nutmeg is the seed inside the fruit; Mace is the aril surrounding the seed.) Nutmeg is a tree native to Indonesia and cultivated in the West Indies, South Africa and other tropical climates. The tree will grow up to 25 feet tall and has a grayish-brown, smooth bark. The leaves are dark green and glossy on top, paler green below. The tree will not flower until around nine years old. Flowers give way to the fruit – a brown, wrinkled, oval drupe containing a kernel covered by a bright red membrane, or aril.

Cultivation Requires a tropical climate. Many farmers increase their trees by replanting volunteers – those plants grown from seeds dropped by the trees. Fresh seeds are required if cultivating from seed and one must differentiate male from female seeds. Both are required for cross-pollination. Young trees require both windbreaks and protection from the sun.

Side Effects Ingestion may produce stomach cramps, flatulence and catarrh.  It is also mildly hallucinogenic but along with the hallucinations may come headaches, stomach pain, double vision, delirium, heart palpitations and tachycardia. As few as two whole nuts may cause death.

Medicinal Uses Both dried nutmeg and mace are used in small amounts in cookery. Avicenna (c. 980-1037 CE) is said to be the first to notice the medicinal properties of Nutmeg. Nutmeg is rarely used alone but may be added to compounds for flatulence and to correct the nausea arising from other drugs. A nutmeg infusion was used in the 19th century to treat insomnia: one nutmeg was steeped in one pint of tea. The dose was “a small cupful”. Wild dreams, anyone?

Magical Uses A nutmeg is either carried in the pocket or threaded and tied to braces (suspenders) to prevent or cure rheumatism. The same is done for general luck and the powder is included in many spells for money or luck.

Interesting Tidbits Nutmeg was a popular but expensive spice in the 17th to 19th centuries. It was fashionable among the wealthy and one can’t talk about nutmeg, even historically, without talking about the hallucinogenic qualities that some folks (who could afford it) liked. It was so popular that the Dutch massacred the people of the Banda Islands in 1609 to gain control of their nutmeg trade.

The Dutch and British were chasing each other all over the world during the 17th century in attempts to control the spice trade. Nutmeg was so important that in 1667, the Dutch traded the island of Manhattan in exchange for a nutmeg-producing island and South American sugar-producing territory controlled by the British.

Did I say it was expensive? In said 19th century, the lady of the house would carry a silver grater and nutmeg box on their chatelaine (a belt or loop worn at the waist with items needed to run a household) … probably right next to the house keys.

So, as I’m the lady of the house who really needs a specialized grater and doesn’t want anything as boring as a plain ol’ modern grater, who’s willing to be a Secret Santa (a few days late) and get me this one I found on Ebay: 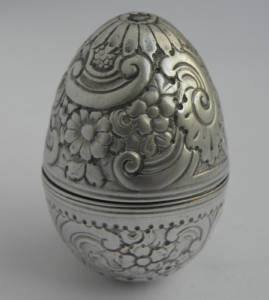