On Wildfires and Elections

I’m on edge. It’s no surprise but still…

In case you haven’t been paying a whit of attention to the news, there are wildfires throughout the Southeastern United States. It’s no wonder…rain has been scarce and we’re tinder-dry. (I was watching the news a few nights ago when they interviewed a US Forestry Service (USFS) spokesperson. She said they measure moisture on a scale of 0 to 800; 0 being pure water, 800 being the Sahara Desert. She said we’re in the 700s.) So far, we’ve been lucky here. All we’ve gotten is smoke, and even that depends on which way the wind is blowing. See that orange star between two red fire markers? That’s about where we are. 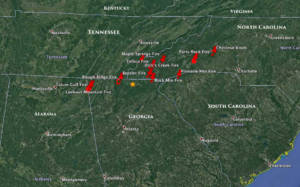 This map only shows ten of over two hundred fires burning throughout five states. The red dot to our left is the Rough Ridge Fire which, as of yesterday, had burned nearly 25,000 acres (according to one site, that’s larger than the borough of Manhattan in New York). The Rock Mountain Fire, to our right, almost 7,000. Neither is even close to being contained. They say the Rough Ridge Fire was started by a lightning strike; Rock Mountain was intentional. Why would anyone do such a thing?

And…I’m Earth-sensitive. Normally, I love it. I can take a walk and feel the emotions of the trees, shrubs, ground… Today? Not so much. All the living things are parched – it’s even worse than the drought in 2007. Don’t think plants speak to each other? Those two wildfires are miles away from us, yet our trees are in pain for their brethren. Logically, I know occasional fire is good for a forest (hell, the USFS does controlled burns regularly) but that knowledge doesn’t help their feelings or mine. And there’s nothing I can do to assuage their fears except tell them I’ll do my damnedest to protect them. Both of our outside spigots have hoses hooked up, ready to use should the worst happen. At least, we’ll use them as long as we’re allowed to stay, and as long as our well holds out.

So here I sit, hoping against hope no idiot flicks a lit cigarette butt out a car window; and mentally reviewing what we’d need to snatch if we had to evacuate. (That includes where my heavy leather gloves are kept – Yuri and Sev do not like cat carriers.) I’ve never had to think of such things before.

Add to that the US elections a couple of weeks ago and the ensuing madness … people attacking Muslims, people of color, LGBTQ people just because they think it’s now okay. After all, Mr. Trump talks that way. I am saddened that in 2016, I feel like I live in 1930s Germany.The uncertainty of the future seems worse to me than it ever has and I’ve voted in 10 presidential elections.

I live in a heavily fundamentalist Christian area. Although I’m pretty circumspect about my practices, I am out of the broom closet. I believe my neighbors are reasonable people but what if one of them opened their mouth to someone not so reasonable? I have very strong wards … and a gun I’m not afraid to use. Even thinking about something like that is very uncomfortable but I was a Girl Scout once: Be Prepared.

So, if I’m quieter than usual, you know why.