In case you didn’t know, mountains have micro-climates. We’re on the southeast side of a mountain and the worst of wind and cold seem to go right over us. We’re generally a degree or two warmer than just 400 feet downslope. Although I cover the more sensitive plants, we’ve managed to dodge the bullet winter-wise…until this year.

While not the coldest on record (which is -16°F), 7th January saw the temperature here drop to 0.3°F and it never made it above freezing that day. The month continued with much colder-than-normal temperatures. I wouldn’t have worried except those frigid temperatures were accompanied by high winds, blowing covers off tender plants.

We lost shrubs that were winter-strong for ten years. The lovely Fragrant Tea Olives that delighted me with their light, liquoring scent as I walked up the front steps or just sat on the front porch in late fall are gone. Two screening shrubs (one was ten feet tall) didn’t make it, either. (Those I’m wonder how we’re going to dig out without destroying the shrubs to either side that did survive.)

The most devastating loss, though, was four of my six Rosemary plants, including two that were about three feet tall by three feet wide (and that’s after a bountiful harvest a couple of times during the year). The wind blew their “greenhouse” off them – twice –  and they were exposed for several hours before I could throw a coat over my bathrobe, get out there and once again recover them. Two children of one of the big plants survived but still aren’t very happy.

You probably know from my other writings that I have a special relationship with Rosemary and have had since long before I put the first plant into the ground at my old house. I was in tears when I uncovered them a month ago and discovered they had died. My garden just didn’t feel right. I knew I would replant but had a few other things to do, first.

Yesterday, I stopped off at a garden center (a real one, not one attached to a home improvement store) on my weekly trip to Atlanta. I hoped upon hope that they would have some Rosemary plants left. It’s past normal planting season in this neck of the woods and most stores are very low on stock by this time. I was – sort of – in luck. They had one left and one is better than none, right? As I checked out, the clerk asked the usual, “did you find what you were looking for?” and when I replied that I would have taken more if they’d had them, she offered to look at the inventory in other Atlanta-area stores to see if they had some. Not only did another store have three, they are doing an inter-store transfer so I don’t have to go farther to get them! (Atlanta area peeps – give Pike Nurseries a little love.) 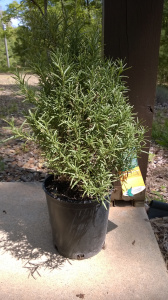 As I walked out to my car with my nose buried in one Rosemary plant (I’ll pick up the others on Saturday), my world was made right.