I am an inveterate list-maker and note-taker. There are scratch pads and pens all over the house so I don’t have to go hunting for something to write a thought on. For my writing, I’ve used spiral-bound notebooks – one for each fiction series. (The nonfiction have their own 3-ring binders for all the research!) The only problem with notebooks, despite highlighted edges and a lot of paperclips, is nothing is truly organized, much less searchable. The other problem with a notebook is it’s generally not where I have an idea, meaning I either go upstairs to the office to grab it, or write a thought on a piece of paper then transfer it. It’s not efficient and my Virgo-ness isn’t happy.

Sometime in early December, I think, an author I follow on Instagram (and I wish I could remember who), posted an image of a ReMarkable tablet they’d bought. They were thrilled with it. The idea intrigued me so I looked at it.

My first reaction was a gulp at the cost. It’s not cheap! By the time I added their upgraded stylus (has an “eraser” at the top) and an “inexpensive” cover, the pricetag was almost $600. On the other hand, how much money and time had I wasted using paper and having to search through things? They have a 100-day return policy so I bit the bullet. 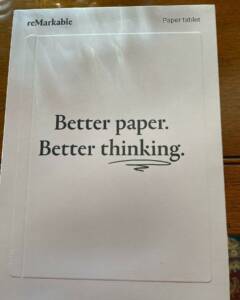 I’ve had it about three weeks, now, and here are my thoughts:

If you already have something that uses a stylus (perhaps a Galaxy Note phone), you can save a bit. Same thing goes for a cover – it’s not necessary but our cats don’t manage their claws well so I put a cover on virtually everything. I still have a month or so to decide for certain whether I’m going to keep it but I’m leaning toward, “yes.”