Spicing Up the Holidays

My inner child has been whining, “WHY?” for the last several days. WHY do we associate many warming spices with the holiday (Yule/Christmas) season? I’ve just spent a couple of hours browsing the Internet for answers and haven’t found a danged one. Oh, yes, there are plenty of sites giving generic spice history but nothing specifically associated with the holiday season.

So, I’m going to go out on a limb and do some conjecturing.

First, most of our holiday traditions come from the northern hemisphere where it can get bone-chilling cold in the month of December. Cinnamon, Clove, Ginger, Nutmeg and Pepper will all warm your innards in addition to adding interesting taste to otherwise bland foodstuffs. (Eggnog without spices? Milk, egg yolks, sugar & rum. Yuck. Add in Cloves, Cinnamon, Vanilla & Nutmeg – YUM!)

Second, up until the last century or so, spices were expensive and not generally available to the masses. Yule/Christmas (along with other feast days) is generally considered a time of splurging so those who could incorporated the expensive spices into their cooking. (For an interesting perspective on spice usage in the Middle Ages, read this.)  Once most spices became affordable to the common man, food became tastier more often and the more expensive stuff (like Ginger and Nutmeg) was used in foods served on holidays. 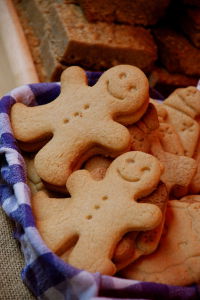 Lastly, decorated gingerbread (either cake-like or in biscuit/cookie form) can be traced back at least 500 years. Food (generally biscuits/cookies) was the first decoration on Yule trees. The ubiquitous gingerbread men are attributed to Queen Elizabeth I, who served man-shaped, decorated cookies to visiting dignitaries. Along came the Grimm Brothers with their candy witch’s house in the 19th century and gingerbread houses became widely popular.

Have I answered my own question? Nope. I’m telling my inner child to shush. In the meantime, I’m putting some Clove & Cinnamon oil into the warmer while I pull cards from my grandmother’s recipe box for my annual bake-fest. One of my favorites:

Mix shortening, sugar, egg, molasses, anise oil & water. (Works best if you put the oil in the water before adding to the bowl.) Blend in remaining ingredients. Knead the dough until it’s the right consistency for molding. Shape by level teaspoons into balls. Place on ungreased cookie sheet and bake at 350°F for about 12 minutes.  Store in an airtight container. (My grandmother rolled hers in confectioners’ sugar before storing. I like them best plain.)