Yes, I know. Summer doesn’t officially start until Friday morning. So sue me. The herbs aren’t waiting a week.

I spent a long, lovely weekend in the garden. It’s true what they say: gardening is great therapy. Just in case you don’t follow me on Facebook or Twitter (why not?), I’ll tell you I had an up-and-down Friday. It started out great: Baneful! is finally out. (If you missed it, scroll back one post for all the links to purchase it.)

It ended on a really sucky note: I had to put our almost-16 year old cat to sleep.  Logically, I know it was the right thing to do but damn! I have to stop myself from fixing her pill at certain times and continually look for her on my bed or in her chair.

Anyhoo, I worked out my emotions. Because I couldn’t do much in the garden at all last year (due to a frozen shoulder), I’m still catching up. One of the things that sorely needed attention were the paths, which are all mulch. Or they’re supposed to be. Neglect and heavy rainfall creating a wash problem had really messed them up. 52 bags of cypress mulch later, they finally look like they’re supposed to.

Once that was spread, I turned my attention to the beds. The Clary Sage is in its second year and, true to form, is flowering! 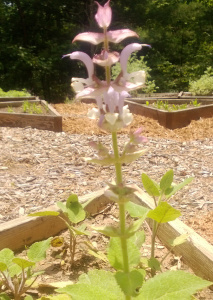 Look at those delicate purply-pink flowers! Two more plants (in the other Clary Sage bed – I have two) are also about to pop.

This, however, is my clue it really is summer: 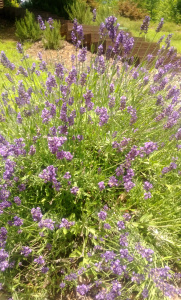 I have several Lavender plants, only two of which are really happy – this, obviously, is one of them. It sits at the foot of the stairs from the house to the garden and is a wonderful greeting!

One thing I didn’t take a photo of is the tomatoes. That’s the only vegetable I grow because hubby’s idea of a vegetable is the ketchup on his burger & I alone simply can’t eat everything even one plant of anything else would produce. (Yes, I have a recipe for homemade ketchup. Salsa, too.) Those two plants are now about 3 feet high & 3 feet wide and have not only tons of blossoms but baby ‘maters, as well!

Other things are emerging, slowly. Much more slowly than in past years. In a few days’ time (after it quits raining – again), it’ll be time to thin the poppies, belladonna and carnations (which I grow simply because they’re my favorite flower).

So, how’s your garden doing? Is it proving to you it’s summer?!

PS Neem lotion may do a great job of repelling chiggers, gnats and the like, but it doesn’t bother spiders at all. You should see the huge bite on my knee!