I had planned on just posting a bunch of pics to social media but this deserves a blog post.

First, remember where we live … in the country, up in the mountains. We rarely go to concerts or other artistic events because what may be an easy 15-20 minute drive for city people is over two hours for us; at least half of that on secondary roads to this particular venue. We had tickets to see TSO last year and the weather the night before would have made our trip treacherous, so we opted not to go. (As a side note, we lost power for almost two full days thanks to that storm.)

This year, I was watching the weather closely, biting my nails. Another winter event was headed our way – would it hold off? The worst of it stayed north and east of both us and the event venue. Thank goodness! But that didn’t mean it wasn’t a miserable drive both ways: temperatures in the mid- to high-30s F, heavy rain, and gusty wind. (I’m still thanking the car gods for butt warmers in cars. The walk from the venue back to the car was wretched.)

But oh, it was so worth it. The music was great, as expected. I can’t gush enough about the visual spectacle and my puny phone camera wasn’t able to properly capture everything. But here are some shots: 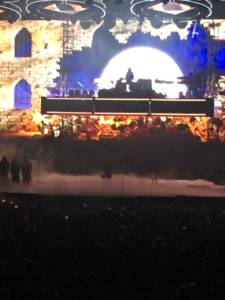 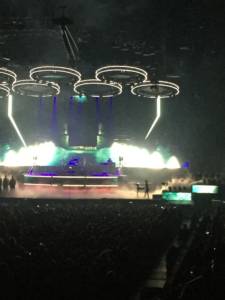 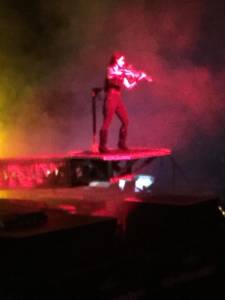 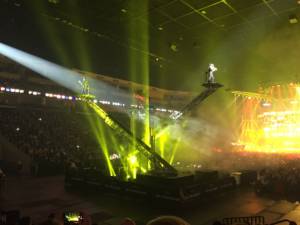 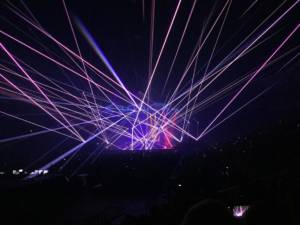 If you have a problem with lasers or strobe lights, please do not watch this brief video clip. If you don’t, enjoy!

I did have one problem, though. Toward the end of the performance, they had flames spurting left and right on stage. Husband said at one point, the flames formed a pentagram. I would have loved to have seen that, but I was a little distracted. This guy has one of the best butts I’ve seen in a while and I was staring at him, rather than the stage. 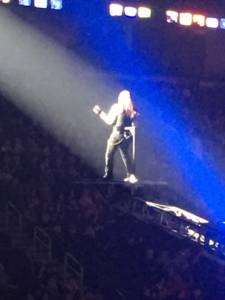 As someone who worked backstage at theaters [mumble, mumble] years ago, I’m always interested in the ‘plumbing’ of a show. I do believe theirs is more complicated and extensive than Cirque du Soleil (which is saying something). According to the guy who spoke while the ladies were changing clothes, it takes 20 semis, 17 tour busses, 112 TSO folks, and another 100 locals to put this thing on. 8 hours to set up, and they only did two shows in Atlanta, leaving to do another two in another city the next day. So glad I’m not one of their roadies!

One thing I really appreciated: I rarely go to concerts anymore, and not just because of the travel time. The music is simply too loud for me to enjoy. However, between using the native PA system which is a) throughout the arena and not just blaring from big, honking speakers onstage, and b) already tuned to the arena; and their board operator’s skill, not only did I not cringe at the volume, I didn’t even have to turn down/take out my hearing aids.

My sole complaint: they use artificial fog extensively. There was already a haze in the arena from their afternoon show and as the concert progressed, so, too, did the haze. I started coughing about half way through the performance and woke up early Sunday morning with a sore throat and inflamed sinuses. Didn’t last long but nonetheless…

It’s two days later and I’m still in awe. If you ever have an opportunity to see them in person, do not hesitate, go. It was so worth getting home after 1 a.m.!