As I said last week, it’s taken me a while to process my visit to Tulum. I’m not certain I’ve still fully grasped everything, but here goes…

(Note: most of what I’m saying here is from our tour guide who, in addition to being an archaeological guide, is part Mayan. Take it as fact, or not.) 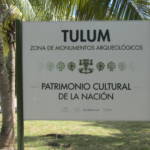 First, Tulum was built on the highest point on the Yucatan Peninsula and the temple – El Castillo – sits almost at the edge of the bluff. (Husband, who grew up along the coast, estimates that in its heyday, it was probably visible five or six miles out to sea.) And what a perfect site to build on – so defensible! Landward, it’s surrounded by mangrove swamps which, in addition to being almost impossible to move through without a lot of machete work, are inhabited by animals like crocodiles and venomous snakes. 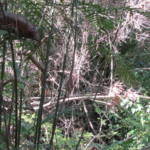 Thankfully, we were there on a dry, sunny day before the rainy season. Our guide told us Tulum means “stinky soil” and that would definitely apply when things were really wet. Yet, the official site says Tulum means “wall”. I think either would apply.

One you’ve made it to the wall, you don’t have much of a choice of entries unless you want to try to scale the wall. There are only five gateways, and they’re tiny – even for a small person like me. Husband had to duck and I saw several people going through sideways. (The exit is now a path with stairs, thanks to the restoration.) 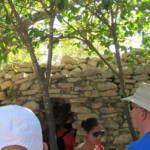 Once through the gate, you see a beautiful clearing with the ruins. (I can’t imagine the work that went into building the city, much less uncovering it again.) Not many structures are still standing and those that are, aren’t fully intact. But compared to today’s cities, it’s small. The entire site within the wall & up to the cliff is only about 300 acres – that’s about 1/3 the size of Olympic Park in London! 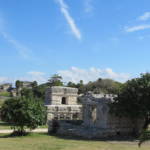 The first thing that hit me was the silence. Even with a bunch of tourists walking around and several tour guides giving their talks, it was so peaceful! The first word that popped into my head was “sacred”. Makes sense. The Mayan were very careful with their land, living in harmony with it rather than trying to force it to their will.

Tulum was a trading port – one of the most important in the Mayan Empire. If you look at where it’s situated on a map, you can see that it’s in a perfect spot for people to bring things both by land and sea. There’s a natural cove at the base of the cliff, making it easy for boats. Although, I wouldn’t want to haul my goods up or down that path! I would love to see a different site (leaving the ruins as they are), set up as it originally was, with re-enactors. At least, re-enactors doing what we think they would’ve been doing 800 years ago. We can thank the conquistadors for destroying virtually everything related to the Mayan culture.

Some pics of the ruins, including El Castillo*: 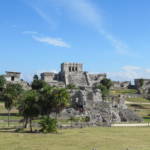 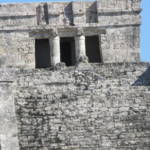 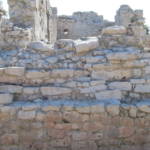 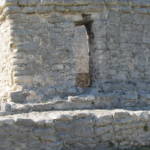 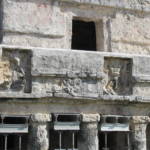 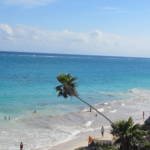 *Those two lumps on El Castillo (better in the closeup) are the sacrifice stones. The person would’ve been laid on their back over those two stacks of rocks so the priest could more easily go up under the rib cage rather than trying to go through it to get to the heart. Ouch.

As an earth witch, I wear moccasins when I can’t go barefoot so I can feel what’s happening around me. While I still got the feeling of “sacred”, I didn’t get the energy buzz I normally get, which puzzled me. Husband and I talked about it later and we think it was because of all the underground water. The Yucatan Peninsula is riddled with underground rivers, and cenotes are all over the place, providing fresh water – if you want to climb down for it! Which, of course, they had to. Water seems to negate earth energy for me. I’m curious what I would’ve felt if we’d been allowed on the ruins themselves. Stone has a long memory. (But thankfully, we weren’t. I’d hate to see them destroyed any further.)

Unfortunately, the number of people walking around sort of kept the wildlife away. According to our guide, there are several coati-mundi living there, including two that aren’t shy. I was so disappointed I didn’t see them! But here’s a cool bird and a squirrel that didn’t immediately split when I got close: 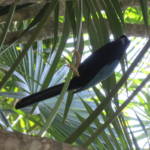 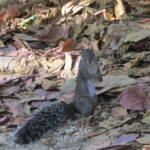 Another disappointment: our guide said there were native Maya selling things they’d made in the village attached to the historical site. We would’ve definitely bought something if we’d seen anything we were certain was handmade but all the wood carvings looked like they’d have a sticker that said, “hecho en China” (made in China). So, we didn’t.

The place fascinated me. And I still want to go to Chichén Itzá.