Update from the Mountains

I’m going to be scarce for a few days. There is supervising to do:

Two years ago, 80+ year old clients got a German Shepherd. They never should have – they’re not equipped to give such a dog the routine and discipline it needs. Of course, things have gone to hell in a handbasket…they can’t control him and his aggression is coming to the forefront.

Enter DJ and her big mouth. I’ve known for several months they were going to have to get rid of him. Locker and I are buddies…each week he’d greet me as I walked in the door, obeying my command to ‘sit’ and a split-second later, flopping on his back to get a tum rub. I offered to take him if they couldn’t keep him.

Yesterday (actually, Monday evening but I got the message yesterday morning), the son with whom I have a good relationship – both professional and personal – called to ask if I’d come get him. Locker’s aggression got so bad that he bit the son’s wife. I said yes and immediately made a call to a friend who works with several rescue organizations, including one that trains service dogs for returning veterans, and asked her to find him a forever home. I love him but our lifestyle isn’t conducive to having a dog. He’s young enough that with retraining and the proper, strong-willed human that he’ll be a good dog for someone. 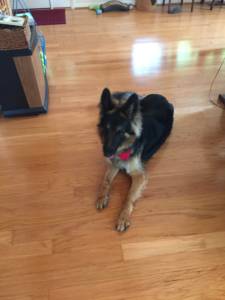 So, I re-routed myself and at the end of my weekly Atlanta run, loaded Locker and all his possessions into my car. Things were hunky-dory (except for the cats, of course), until the husband came home from work. He got aggressive towards another human that lives in this house! Totally unacceptable! Into the garage he went.

Apparently, garage discipline works because he was just fine with the husband this morning. The cats are another matter altogether. All four are out on the deck and very unhappy with the monster in their house (Locker weighs close to 80 pounds).  He’s growled at them through the door but shut up immediately with a firm ‘no’. Should he growl again, he’ll go back into the garage for a bit until he learns his lesson.

In the meantime, I have a dog that needs walking. Something I haven’t had to do in over 40 years. Then I have to work and try to keep an eye on everyone at the same time. It’s going to be a very tiring few days…