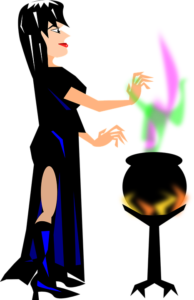 To select the proper herbs to use in a ritual of any kind, there are several questions you must ask yourself (and/or those you’re working with).

I’ll start by saying intent is everything in magic and words, actions, or even thoughts can change its course. For example, you’ve got all the herbs you need for a healing spell but change your words up a little? You’ve got yourself a hex intended to make your target ill.

To figure out which herbs you may want to use, imagination is the key. Yes, there are time-honored magical uses for almost every herb but thinking outside the box may give you a wider selection and one that’s even more appropriate to the situation. Read on to see what I mean.

First ask yourself, “What’s the purpose of my ritual?” Is it a thanks for something? The turning of the seasons? To send healing energy to someone? Search out herbs associated with your purpose – fresh flower petals to usher in spring; an apple (or leaf from an apple tree) to honor fall. If it’s a healing ritual aimed at a particular person, make sure you don’t use anything they’re allergic to!

The next consideration is if you work with deity. There should be at least one herb in your mixture appropriate to that god or goddess. For example, it’s widely-known garlic is one of the herbs sacred to Hecate. Mugwort and lavender are a couple of others.

But what if you don’t know which herb(s) would be proper? Do some thinking and research. Where is that deity from? If, for example, he or she is part of the Norse pantheon, what’s native to or what grows easily in the Scandinavian countries? Or…what attributes does that deity have? Here, let’s take Thor as an illustration. While there are herbs traditionally associated with him, what if you don’t have them…or they wouldn’t be quite appropriate to the purpose of the ritual? Thor is the god of thunder. Thunder is caused by the rapid expansion of air around a lightning bolt > Lightning is electricity > Electricity is fire. Search for an herb with the elemental association of fire.

Then, are you concerned about the land spirits? (You should be.) What would they like? Something that is native to their area. If you’re in the desert you want something that will easily grow there. It doesn’t have to be white sage, y’know. A spine or two from a cactus would work, too.

What season is it? Winter? What’s growing in winter? Fir trees, holly, some hardier herbs if you’re in a mild climate zone. While people eat nuts year-round, they’re often associated with the winter holidays – at least here in the northern hemisphere. Buy some nuts still in shells and crack them open. Add the meat to your after-ritual meal and use the hulls during the ritual.

Lastly, how are you going to use them? A lot of people burn herbs during ritual but what if you’re somewhere you can’t have a fire? A lot of indoor venues prohibit burning, and if your area is in a drought situation, don’t you dare burn anything outdoors – all it takes is a small spark.

And…if you’re planning on burning them, how will they burn? Some, like fresh fir needles, take a long time to catch and will distract you from your ritual as you hold your match or lighter to your pile of herbs for ages. Others with strong oils, like garlic or cinnamon or pepper, aren’t recommended unless you want to cough, choke, and wipe your eyes all the way through your ritual.

If you’re going to scatter them, ensure the herbs you use are not injurious or poisonous to animals. While most wild animals will avoid plants that are bad for them, your neighbor’s dog may not, and they’ll all hurt if they step on a thorn or spine.

If you put as much thought into the herbs to be used as the wording, I think you’ll be very happy with the outcome of your ritual.