The Wheel of the Year – A Rant 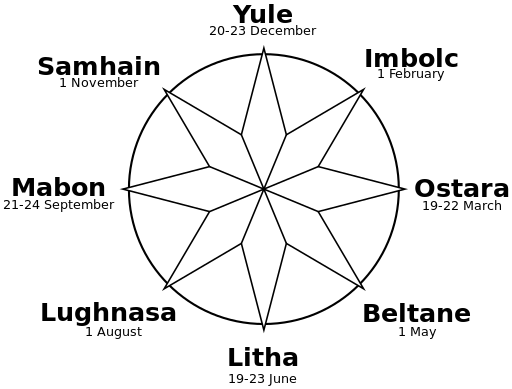 August first was Lugnasadh, Lammas, First Harvest, whatever you want to call it. A friend who also lives in the Southeastern United States posted on Facebook that he wasn’t celebrating … it was still summer. And I agreed. We were both called on the carpet (somewhat) for saying such.

FYI, the “Cross Quarter” holidays aren’t celebrated by all, and sometimes not on the same date. Lughnasadh/Lammas and the other three cross-quarters holidays were started in climes much more northerly than mine and by cultures who relied on farming for their living. When I lived farther north, around August 1st was indeed the beginnings of harvest and although the days were still hot, there was a feeling that Fall wasn’t far away. First harvest around here happens about mid-July. I saw the neighboring farmer harvesting part of his kitchen garden then. He cut the first crop of hay the middle of June and is now growing his third crop. So, August first? Mid-harvest.

The other thing that chaps my ass is the date. You do realize the calendar by which we now live only dates back to the 16th century (1582, to be exact) but wasn’t adopted by all areas of the world until the 18th century? I can’t speak for my ancestors, but I’m willing to bet they celebrated their first harvest on different days. Weather is a huge factor in farming. More or less sun, more or less rain (or snow) affects when you would be able to get your seeds or seedlings into the ground and the length of the growing season, all affecting when you’d be able to gather your crops. Horrible weather year? Might not be a celebration at all because there was nothing to harvest so nothing to celebrate.

I apply the same sort of logic to the Equinoxes and Solstices. The “official” dates for each vary by a few hours one way or the other due to the tilt of the Earth and the not-exactly-365-day-year, making them fall somewhere in a 2-day period, but they’re calculated by when the sun crosses the Equator; and when the Sun is at its farthest points from the Equator. I don’t live at the Equator. I’d also be willing to bet my ancestors celebrated these events when they happened where they lived. I celebrate the Equinoxes and Solstices when they happen here. I go by the “longest day, longest night, and equal night” definitions. As an example, the true Fall Equinox here, September 26th, is as close as one can get – less than a minute off equality. The official date is September 22nd.

I don’t celebrate Cross Quarter days because they really hold no meaning for me – I am decidedly a city girl in that regard. (Samhain? The veil’s thin around here every day and I venerate those who have gone before every day.)

I can’t recall a time I ever argued with someone else’s holiday. If “First Harvest” is August first for you, have at it. If you want to celebrate the other holidays according to the calendar, good for you. But don’t climb in my shit because I don’t celebrate as or when you do.