Coming Up with Characters

I’ve heard it said that fiction writers base some or all of their characters on people they’ve met. In my case, it’s true. Well, the personalities, anyways. Probably not the species. Mostly. I thought I’d give you a glimpse into how I came up with some of my main characters. 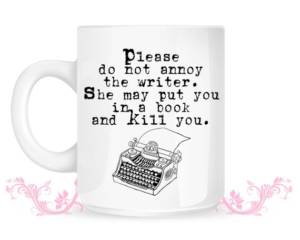 (Clicking on that photo will take you to the page where this mug is offered. I love gifts! 😉 )

As background: In my previous life and, to a lesser extent, my current one, I’m an administrative assistant. In addition to accounting and bookkeeping duties, I end up typing up correspondence for my clients who, although they own computers, can only hunt-and-peck at the keyboard. (Don’t get me started on proper formatting of a business letter!) Hence the premise for the books.

Anyways. As many friends have deduced, Amy’s personality is very similar to my own: a stereotypical Virgo. Her appearance, though, is definitely not me!

Ev, Amy’s boss, is my former employer with a touch of another businessman I worked with for a while. (Neither of whom looked anything like Ev, but I did work for a while with a man who had a hygiene problem.) Not that I’ve ever known anyone to get into the pickles Ev seems to find himself in. Thank goodness.

Fudge, the familiar cat? Anyone who is or has been owned by cats will recognize him in one of theirs. In my case, he’s very much like my first cat, Boomer, who thought he was human. Although he never spoke English to me, the various tones in his meows and expressions on his face were easily interpretable. We had conversations.

Amy’s boyfriend, Tony, comes from an old boyfriend of mine. Their appearance is even similar. No spoilers, but what happens to Tony happened to the boyfriend, too.

Gregory, Ev’s driver and bodyguard and, eventually, Amy’s mentor, is loosely based on a bouncer I worked with at a bar many moons ago. Cork, the owner of Amy’s favorite pub, comes from that same bar. (I have fond memories of that place…)

So, a peek for you into how I come up with characters. There are even more in Amy’s third adventure, which is currently at the editor’s (and, sadly, still lacking a title). Like the egotistical elf, whose prototype I also dated for a (very short) while.

Writers: how do you come up with your characters? Readers: do you see anyone you know in a writer’s actors?