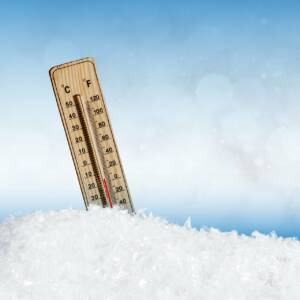 If you follow me on social media, you know it got cold here last weekend: down to 1°F Saturday morning – very unusual for Georgia! Thankfully, our house is nicely insulated so we stayed warm, despite the furnace not quite being able to keep up between the cold air and frigid wind (we have a lot of cubic footage to heat with a cathedral ceiling in the living room). But the stories out of Atlanta about frozen/burst pipes and electricity going out so no heat are horrifying. People will be dealing with the aftermath of burst pipes for months.

Just so’s you know: building codes down south aren’t the same as those up north. I really do not understand not insulating pipes because it does get below freezing at least once or twice per winter, but I do get not building a house quite as tightly as those in colder climates. Houses down here need to breathe in the summer months to prevent humidity buildup and subsequent mold problems.

I got to thinking about how my characters (El from Reinventing Herself and Jo from Reclaiming Herself and their animals) would’ve handled such cold weather. They both relocated here to the mountains from Atlanta but have quite different backstories and mindsets.

El was raised just outside Waterloo, Iowa. Although she’d been in Atlanta for a few decades, dealing with cold weather is coded into her DNA. She would have sighed, lit a fire in the fireplace, grabbed a cup of hot coffee, and snuggled down with a book. Her 100-pound dog and long-hair cat would have snuggled up beside her if they weren’t outside – both have enough fur the cold wouldn’t bother them. Once a day, she’d pull on the parka she still owns to go check the mail. Because she was married to an architect and grown up in the north, she would have ensured the pipes were well-insulated during the remodeling of her house and winterized the outside spigots every year.

Jo, on the other hand, was born and raised in Atlanta. Despite whatever temperature it was in the house, she would have pulled on as many layers as she could wear and still be able to move. Go check the mail? Hell, no! There wasn’t anything so important she’d need to go outside. She wouldn’t have thought about her home/workshop construction until during a phone conversation when the weather people started talking about the impending arctic air, El would have gently inquired about pipe/spigot insulation. Then she would have panicked but finally taken a deep breath, inspected everything, and insulated where needed. Her familiar, a crow, would have spent the several days of cold in the house as close to Jo as possible, making snide comments about virtually everything, but secretly grateful for someplace warmer than her nest.

My husband and I both grew up in areas where winters can be hard so, although we both hate cold weather, are able to deal with it. How about you? Do you like cold weather?