This is so much easier than trying to fit everything into 240 characters for Twitter! 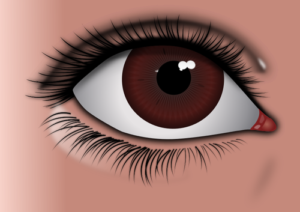 If you follow me on social media anywhere, you know I’ve been having vision problems. It started seven weeks ago…I started having flashes – like lightning – in the corner of my right eye. It happened about seven years ago, too, and then I was diagnosed with a partially detached retina. Doc said, “it’s not that worrisome. Give it a couple of weeks and it’ll probably heal on its own.” It did. So, I wasn’t all that worried. Until. The next day, my vision started blurring in that same corner. The day after that, the blurriness covered about 2/3 of my vision in that eye. Sort of like a clear floater you can’t blink away. And the eye strain. Two hours on the computer and my eyeball ached like someone was squeezing it. Eye doctor’s appointment, it was.

Come to find out, this is something that occasionally happens, for no good reason, to older people. There’s something making the fluid in the eye move, which it isn’t supposed to do. Ideopathic, they call it. (Look the word up if you don’t know it.) Lucky me. Ideopathic was the “cause” for my frozen shoulders, too. The prescription is to wait to see if it heals itself with time. If not, the next step is to have cataract surgery early. Getting rid of one blurriness might (and I don’t like that word) get rid of the other.

For six weeks, I limited my computer time to necessary work only. Being an accountant (at the beginning of tax season) and a writer, this isn’t the best plan. No writing, and no reading, either. Once I got the “must do” work done, I’ve been plugging in a set of earbuds, closing my eyes, and listening to audiobooks. Not my favorite way to pass time.

Last week, finally, the lightning flashes stopped and the blurriness is sllllooooowwwwllly retreating. (It’s down to about half my vision, now.) I cautiously spent a couple more hours on the computer, stopping before the pain got too bad. I actually got some writing done! (One more lifetime and an epilogue, and Fudge’s story will be drafted!) I’ve been back on social media a bit but I’m not doing much more than scrolling & getting headlines. I’ll gradually increase that as I can but frankly, I’d rather write!

I cancelled my optometrist’s appointment for next week. It appears time is what it will take and if it doesn’t completely fix itself in another month (based on its progression & regression), an ophthalmologist is my next step, anyway.

So, that’s where I’m at. I’ll post on social media once in awhile but like I said, I’d rather spend what computer time I can get writing.