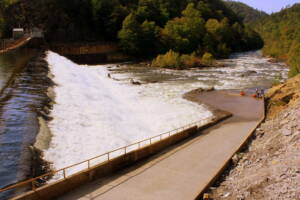 Entrance to Ocoee River from Brent Moore on Flickr

Ellen once again…for the last time. Today, I’ll talk about things to do in Fannin County that I have no interest in pursuing: outdoor activities. As much as I like being outdoors in my garden, I’m not much of an adventuress. I know others are, though, so I’ll tell you what I’ve found in my research.

First and foremost, hiking! The famed Appalachian Trail starts at Springer Mountain in the southern part of the county. Even if you’re not that adventurous, there are over three hundred miles of hiking trails in this county alone. Difficulty ranges from easy to hard, so there’s something for everyone.

Fannin County is the Trout Capital of Georgia. With over one hundred miles of rivers, creeks, and streams (not to mention Blue Ridge Lake, which is formed from the Toccoa River), you can generally catch something by dropping a line in nearly any body of water. Depending on where you fish, you may hook not only trout, but large-mouth, small-mouth, white, and spotted bass; bluegills; yellow perch; and the occasional walleye.

If you’re unafraid of heights, several places have zipline tours. One in particular has several different height/lengths, so you can be a novice or experienced, and still have an enjoyable time. They even have kids’ zips, which have a minimum age of 6.

The aforementioned Toccoa River is also a great place for tubing or kayaking. There are several companies which will rent you tubes or kayaks; or you can bring your own. There’s also boating and swimming on Blue Ridge Lake. There are three public access points to the lake, which have boat ramps and beaches. (Bring swim shoes. The beaches and lake bottom are pebbly.) Oddly, for this Midwesterner at least, the Toccoa flows north, not south. When it crosses the Georgia-Tennessee line, it is renamed the Ocoee River.

Which brings me to the final outdoorsy activity: whitewater rafting. While technically not in Georgia, the Ocoee Whitewater Center is just over the border outside Copperhill, Tennessee. The name might seem familiar: it was the site of the whitewater competitions for the 1996 Olympics. Thus far, it is the only natural river course to be used for those competitions; everything else has been manmade. A caveat: the natural river was altered somewhat to create an appropriate competitive course and you can see the concrete structures if you drive by during the week. This can’t be a spur-of-the-moment excursion, though. By the time it reaches that point in its course, the river is dry most of the year, so the Forestry Service floods it on weekends during the summer. You’ll have to make arrangements with one of the companies that offer those tours or with the Forestry Service if you have your own equipment.

Despite all the crap that happened around here a few months ago (you’ll have to read DJ’s book to see what I’m talking about), I am truly in love with where I live. Come and visit!